We have confirmed the account was not hacked by Iranian militia.

Sometimes an idea comes into our heads and we think it’s fantastic. After further review, there was something pretty obvious that we completely missed in our original thinking. Such is the case for the @Pride Twitter account, operated by “very queer” podcaster Levi Chambers, regarding a meme that apparently made sense at the time.

It reads, “Sending the beautiful person below this Tweet lots of #Pride” and shows someone smiling and pushing the LGBTQ rainbow flag off a building. Now, if this sounds oddly distasteful, it’s probably because you’re familiar with the practice in Iran and other Muslim-majority countries of pushing bound homosexuals off buildings to their death.

Sending the beautiful person below this Tweet lots of #Pride.
✨ 🌕
✨

As Twitchy noted, it looked a little like an execution. “A little.”

The official Pride account thought it would be cute for people to be able to send “pride” to the person below them in their Twitter feed. But the execution? It looked a little like an execution.

Responses on Twitter were just what one would expect.

“HEY I DON’T KNOW IF ANYBODY POINTED THIS OUT TO YOU YET BUT THIS MIGHT NOT BE A GOOD TWEET THE WAY YOU THINK IT IS.”

HEY I DON'T KNOW IF ANYBODY POINTED THIS OUT TO YOU YET BUT THIS MIGHT NOT BE A GOOD TWEET THE WAY YOU THINK IT IS.

“This took effort which means it took time which means whomever created it thought “this is gonna be a banger” for a very long time. Then hit send.”

which means it took time

which means whomever created it thought "this is gonna be a banger" for a very long time.
Then hit send. https://t.co/DWe64VIWjq pic.twitter.com/JJZardQ73D

“The Middle Eastern Chapter of Pride apparently logged in”

The Middle Eastern Chapter of Pride apparently logged in

“Bizarre. How could they be this clueless?”

Bizarre. How could they be this clueless? https://t.co/4P1Yp2wHcV

“Lmfao y’all didn’t think this one through”

Lmfao y’all didn’t think this one through https://t.co/Rl473LKRES

“Y’all got hacked, right? Y’all couldn’t be THIS clueless…”

Y'all got hacked, right? Y'all couldn't be THIS clueless… pic.twitter.com/kP6Kmkkdzz

“The award for zero self awareness goes to…”

The award for zero self awareness goes to…

“This wasn’t well thought out”

This wasn't well thought out

With 100% certainty, if this exact Tweet had been sent by a conservative, they would be banned within minutes. Being sent by someone “woke” means it’s still live 10 days later.

In case it gets deleted: 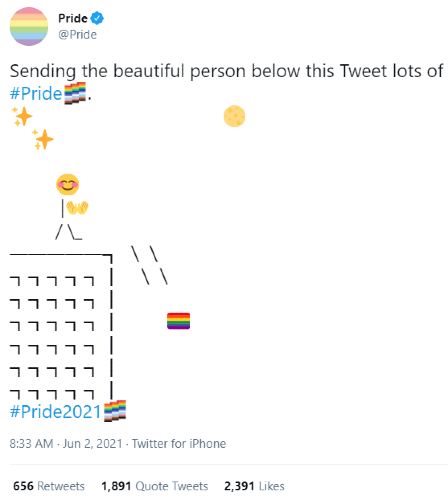