This weekend, I received information from a source with knowledge of California Governor Gavin Newsom’s health condition. He reportedly developed symptoms of Bell’s Palsy immediately after getting injected with the Moderna Covid-19 booster shot and has had trouble speaking coherently. We have sought another source to corroborate before reporting but were unable to get that confirmation until two more reports surfaced today.

The first source is inexplicably “down” as of the writing of this article. Children’s Health Defense, which has been a reliable source for Covid-related news, started experiencing problems with their website shortly after publishing the article below. The other source is Steve Kirsch’s Substack, also published below, which may be receiving his information from the same source that reached out to me as the information is quite similar.

Meanwhile, the Governor’s staff is playing it all close to the vest, claiming that he has “family obligations” that apparently popped up immediately after his injection on October 27. Within two days, he canceled his trip to COP26. As an extremely vocal climate change activist, one would think rubbing elbows with other activists worldwide would make it a “must go” for him regardless of the “family obligations.”

Whether it’s Bell’s Palsy or something else, it seems to be tied to the booster shot. All of his plans changed immediately after getting injected and he hasn’t been seen in public ever since. Both his wife and his staff are screaming about conspiracy theories and acting like it’s perfectly natural for a narcissist like Newsom to be out of the public eye for two weeks.

We hope this story stays up. Whatever took down the Children’s Health Defense website will likely target us after this story is published. Please be sure to share widely to get the word out before the powers-that-be pull the plug on it. Here are the articles by CHD and Kirsch…

A source close to California Gov. Gavin Newsom today told The Defender the governor experienced an adverse reaction to the Moderna COVID vaccine he received Oct. 27, the last day he was seen in public.

A source close to California Gov. Gavin Newsom today told The Defender the governor experienced an adverse reaction to the Moderna COVID vaccine he received Oct. 27.

The source, who asked not to be identified, said Newsom’s symptoms were similar to those associated with Guillain–Barré syndrome (GBS), a known side effect of many vaccines.

GBS is a neurological disorder in which the body’s immune system mistakenly attacks part of its peripheral nervous system — the network of nerves located outside of the brain and spinal cord — and can range from a very mild case with brief weakness to paralysis to leaving the person unable to breathe independently.

The governor has not been seen in public since he was photographed Oct. 27 getting his COVID booster. On Oct. 29, Newsom’s office issued a statement referring to unspecified “family obligations” as the reason the governor canceled his scheduled appearances, including his planned meetings at the global COP 26 climate conference in Glasgow, Scotland.

A local ABC News outlet reported that when “the surprising announcement was made,” a spokesperson said Newsom planned to participate virtually in the climate conference. However, Newsom’s name was removed from the schedule and he did not participate.

The Defender reached out to Newsom’s office today by phone and email, but the office did not respond before publication.

According to Fox News, Newsom’s wife, Jennifer Siebel Newsom, on Sunday tweeted — then quickly deleted — a message urging people to “stop hating” while her husband has been out of the public eye since canceling plans, including his appearances at COP 26. 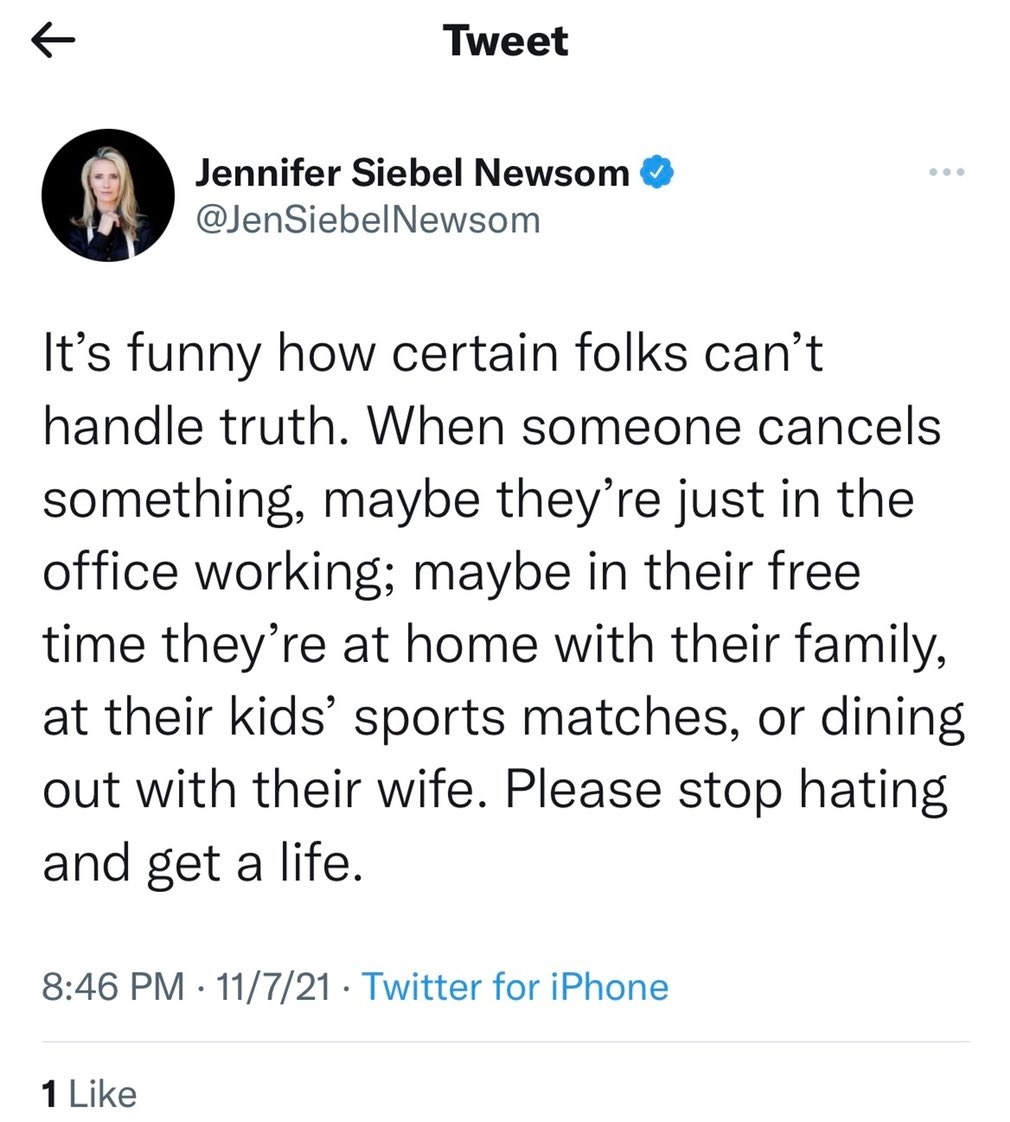 “However, if it’s true the governor has suffered debilitating neurological injuries following vaccination, it raises grave ethical questions about his seemingly dishonest efforts to conceal his injuries while implementing aggressive policies to force the children and working people of California to endure similar risks.”

Newsom has been an outspoken advocate of COVID vaccines and mandates. On Oct. 1, he announced California’s schoolchildren will be required to get the COVID vaccine once it is fully approved by the FDA. It’s the first such mandate in the country.

In a Nov. 3 press release, the governor’s office said California was launching a “robust” vaccination program for 5- to 11-year-olds. The governor has allocated more than 1.2 million vaccines for the 5-11 age group and is setting up 4,000 vaccine sites throughout the state.

According to Times of San Diego, Newsome got the Johnson & Johnson (J&J) COVID vaccine in April 2021 when his age group became eligible. In July, the U.S. Food and Drug Administration added a warning to the J&J COVID vaccine noting the vaccine had been linked to GBS.

Since 1992, the National Vaccine Injury Compensation Program has paid approximately $500 million to 1,450 victims of post-vaccination GBS, The Defender reported.

They say he has personal issues to attend to… like half his face is paralyzed. It’s likely vaccine-induced Bell’s Palsy or Guillain-Barre syndrome. That’s why NO ONE is allowed to SEE him. Get it?

This also explains why nobody has seen him in public since Oct 27: anyone who saw him would instantly know.

I checked into this and I’m over 90% sure that this is true (but I can’t tell you publicly about it without revealing my source) which prompted me to write this article.

Am I 100% certain? No. This is just my personal educated guess piecing together the information (both from public and private sources) that I’ve gathered. What’s your best guess?

How I arrived at my hypothesis

Here’s the background for my hypothesis:

Albert Benavides (aka WelcomeTheEagle88) recently did a VAERS analysis for me looking at symptoms which are elevated by the vaccine versus a 5-year baseline rate (VAERS reports from 2015-2019).

Look at what popped up on #11 (the 11th highest elevated adverse event). You are 1,533 times more likely to get Bell’s Palsy after the COVID vaccines than any other vaccine.

NOTE: This screen shot is the “tip of the iceberg” as far as serious adverse events caused by the COVID vaccines. The full list is over 5,000 elevated adverse events and I’ll be writing about this later today on substack (subscribe to be notified).

Guillain-Barre after these vaccines is less likely than Bell’s Palsy by a factor of 4.5, so I’m guessing it is more likely Bell’s Palsy (but it could be GBS).

Did the vaccine cause Bell’s Palsy (or GBS) for Newsom? He was perfectly fine before the shot and within hours after the shot he’s paralyzed. Could be bad luck. But come on.

Why doesn’t he just admit the truth, that he got Bell’s Palsy (or GBS) from the vaccine? Well truth telling is not how it is done in politics. The reason he won’t tell the truth it:

Newsom is still mandating your kids get the vaccine. A number of them will suffer neurological damage just like he did as a result of his mandate.

Bell’s and GBS are just two of over 5,000 adverse events that are elevated by these vaccine. More troubling is that the risk-benefit analysis for 5 to 11 I’ve seen shows we will kill 117 kids to maybe save 1 kid from COVID.

Governor Newsom and the CDC don’t seem to care about that; there’s not even a CDC category for vaccine deaths.

Over 120,000 Americans have suffered from Bell’s Palsy after vaccination (you take the incidence rate from the table and multiply by the minimum VAERS underreporting factor (URF) of 41 which is calculated here) and it could easily be over 250,000 cases.

A neurologist I know has over 2,000 clients with vaccine injuries (out of 20,000 client base). The neurologist never had any events before now in his/her practice caused by the vaccine. This shows you it is the vaccine causing the events, not “over reporting” as is claimed by the FDA.

When will it end? I hope soon. But nobody in America likes to admit they were wrong. Even after they’ve been injured.

Joel Kallman, the creator of the V-safe application, died shortly after he was vaccinated. He never got a chance to tell people what he thought of the safety of the vaccine.

Let’s hope that Newsom gets the chance to learn from this and change his thinking.

P.S. If you think you know whether it is GBS or Bell’s Palsy, please comment below.