VAERS data released Friday by the Centers for Disease Control and Prevention included a total of 1,237,647 reports of adverse events from all age groups following COVID vaccines, including 27,349 deaths and 222,836 serious injuries between Dec. 14, 2020, and April 15, 2022.

The Centers for Disease Control and Prevention (CDC) today released new data showing a total of 1,237,647 reports of adverse events following COVID vaccines were submitted between Dec. 14, 2020, and April 15, 2022, to the Vaccine Adverse Event Reporting System (VAERS). VAERS is the primary government-funded system for reporting adverse vaccine reactions in the U.S.

The data included a total of 27,349 reports of deaths — an increase of 373 over the previous week — and 222,836 serious injuries, including deaths, during the same time period — up 2,971 compared with the previous week. 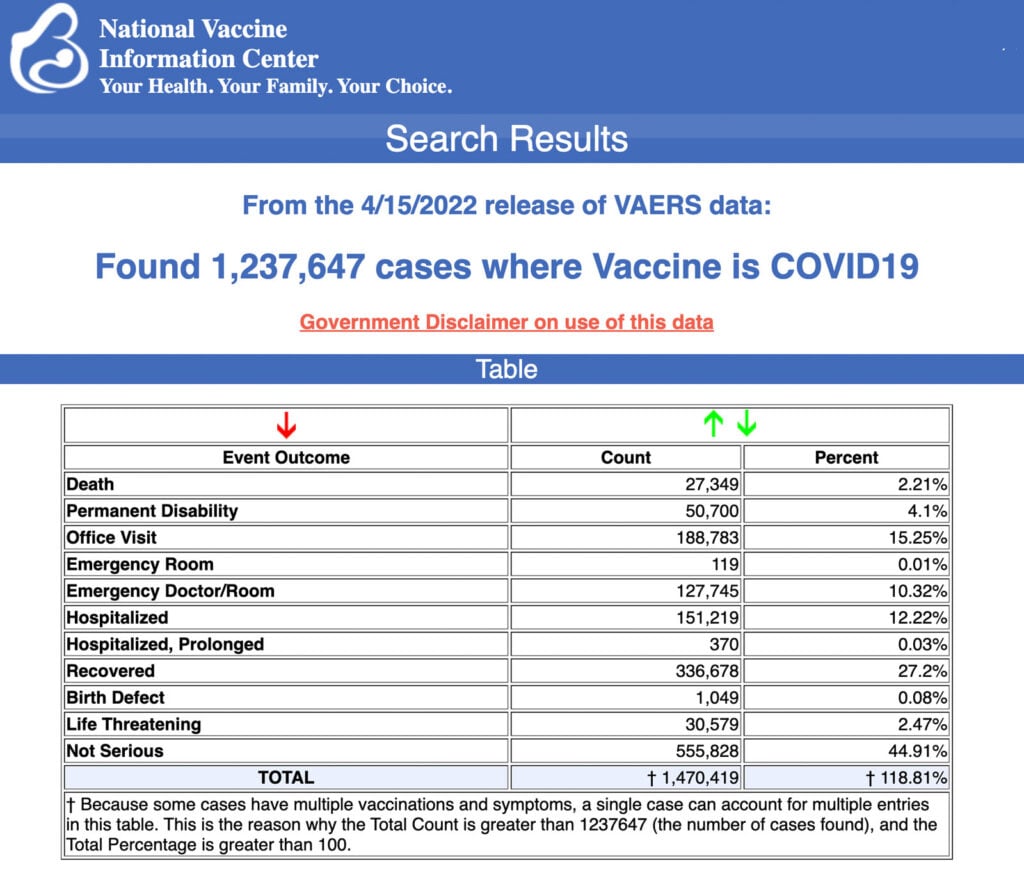 One in 10 primary care physicians don’t agree COVID vaccines are safe, and 9.3% don’t believe the vaccines are effective, according to a survey published in the April issue of Vaccine.

Researchers at the Texas A&M School of Public Health asked 625 primary care physicians whether they strongly agreed, somewhat agreed, neither agreed nor disagreed, somewhat disagreed or strongly disagreed with the following three statements:

According to Dr. Madhava Setty, given what has transpired over the past 11 months with vaccine injuries, waning effectiveness and the FDA’s efforts to withhold Pfizer data, the number of physicians who believe COVID shots aren’t safe is likely higher.

769 athletes collapsed this year during competition

More than 769 athletes have collapsed on the field during a game from March 2021 to March 2022. The statistic was revealed by One America News Network (OAN), which also found the average age of the athletes who suffered cardiac arrest is just 23 years old.

The unprecedented surge in cardiac arrest and other heart issues among elite athletes coincides with the rollout of COVID vaccines.

“How many have gone unreported? Nearly 800 athletes — young, fit people in the prime of life — falling down on the field. In fact, 500% more soccer players in the EU are dropping dead from heart attacks than just one year ago.

“Coincidence? When the Pfizer vaccine is known to cause heart inflammation? No. In fact, many doctors treating these players list their injuries and deaths as being directly caused by the vaccine … This is not a coincidence.”

In an updated report by Good Sciencing, a team of investigators, news editors, journalists and “truth seekers” detailed 942 cardiac arrests and other serious issues among athletes, including 620 deaths, following COVID vaccines.

CDC meets to ‘mull over’ next steps for COVID boosters

The CDC’s vaccine advisory committee met Wednesday to “mull over” what’s next for COVID boosters and consider “upgrades” to the vaccines, The Defender reported.

Some members of the Advisory Committee on Immunization Practices suggested “entirely different vaccine formulations could be needed.” Currently, additional booster doses are recommended only for certain people with weakened immune systems and adults 50 and older.

Vaccine effectiveness is unacceptably low, according to James Lyons-Weiler, Ph.D. And given the findings of Jacques Fantini, a biochemist and professor of virology at Aix-Marseille Université in Marseille, France, the vaccines could have negative effectiveness, indicating disease enhancement.

Sara Oliver, one of the CDC’s epidemic intelligence service officers with the Division of Viral Diseases, said the evolution of the virus will be an important consideration for considering “platforms” for future COVID vaccinations.

​​This is the CDC putting the word out that a second round of vaccine development is expected — and the closest we’ll ever see to the CDC admitting the vaccination program has flopped, Lyons-Weiler wrote.

Chief Medical Officer Filip Dubovsky, during a call with reporters, said the Maryland-based company’s early phase clinical trial found that up to 25 micrograms of the COVID formulation combined with up to 35 micrograms of the flu formulation triggered a promising level of protective antibodies in the Novavax COVID-Influenza Combination Vaccine.

Participants in the Phase 1 trial had a median age of 59 and all previously had received COVID vaccines. Novavax plans to move forward with a Phase 2 trial this year to confirm the appropriate dosing levels, and plans to launch a Phase 3 trial on efficacy during the 2023 flu season at the earliest, Dubovsky said.

Novavax’s COVID vaccine does not use mRNA technology but synthesizes the virus spike outside the human body.

The genetic code for the spike is put into a baculovirus that infects insect cells, which then produce copies of the spike that are purified and extracted. The spike copy is then injected into people to induce an immune response against the virus.

The vaccine also uses a novel adjuvant that contains a purified extract from the bark of a tree in South America, to induce a broader immune response.

The World Health Organization in December 2021 approved Novavax’s COVID vaccine (not the new COVID-flu combination vaccine) for use in the European Union, but the FDA has yet to grant Emergency Use Authorization of any Novavax COVID vaccine in the U.S.

Image by HeungSoon from Pixabay.