VAERS Covid ‘Vaccine’ Death Reports Top 20,000, But How Many Have REALLY Died?

Editor’s Commentary: As we’ve reported on dozens of occasions, the data in the CDC’s VAERS database is woefully incomplete. They have made it very challenging for people to submit reports successfully; one anonymous source indicated it took them three tries and nearly two hours to successfully report their parent’s major adverse reaction to the Pfizer jab. Moreover, most hospitals have a policy of not only neglecting to report clear-cut cases of vaccine adverse reactions, but also of discouraging their patients from doing it themselves.

The database was intended to help the CDC and FDA isolate and study adverse reactions, but that was before Covid. Now, it’s just a thorn in their side as they try to minimize any media spotlights that may shine on it. These reports, which are approaching one million adverse reactions since the vaccines were rolled out, run contrary to their narrative that the vaccines are “safe and effective.”

Many already know the jabs aren’t effective. More must be made aware that they’re also not safe.

There are other factors that keep the VAERS data low, such as a lack of knowledge that it even exists. One would think with such a widespread rollout of experimental injections, the CDC and FDA would actively and aggressively promote their database so they could collect an accurate account of what’s  happening on the ground. They should have started running television commercials and offered assistance so the people were aware that documenting their experiences would help to inform our government of risks to investigate. Instead, they’ve done the exact opposite by encouraging suppression of adverse reaction reports.

Estimates of the percentage of adverse reactions that go unreported range from 90%-99%. That means the database only offers somewhere between 1% and 10% of reality. With VAERS breaking 20,000 reports of vaccine-induced deaths in the latest data dump, the real number is somewhere between 200,000 and 2,000,000 deaths.

(For the inevitable comment about how “1% is a made-up number,” I’ll refer to the FDA’s report acknowledging it before Covid prompted them to change the narrative)

With many websites such as Children’s Health Defense doing what the CDC and FDA should have been doing by alerting people about how to report to VAERS, it is likely that Covid reports are above the 1% minimum representation. The estimate I’ve seen most prevalently used by scientists and doctors who have done independent studies on VAERS is between 40-45-fold underreporting, putting the data on VAERS at around 2.5% of reality.

Looking at U.S. deaths reported and subtracting out average death rates from previous years for non-Covid vaccines, we come to around 400,000 likely deaths from Covid jabs in this nation. Those are not “pie in the sky” numbers to try to make our point. If anything, I would say the number is conservative.

That’s about half of the deaths attributed to Covid-19 itself in the United States. But just as VAERS data is underreported, Covid deaths are overreported. There is no way to tell how badly the numbers have been jacked up for effect, but we know a large portion of the death reports were elderly, asymptomatic people who likely died as a natural course of life but then tested positive for Covid. The government’s financial incentives for medical facilities to accumulate as many Covid death reports as possible means we are dealing with a real number that is far lower than the 800,000 being reported.

VAERS data released today by the Centers for Disease Control and Prevention included a total of 965,843 reports of adverse events from all age groups following COVID vaccines, including 20,244 deaths and 155,506 serious injuries between Dec. 14, 2020, and Dec. 10, 2021.

The Centers for Disease Control and Prevention today released new data showing a total of 965,843 reports of adverse events following COVID vaccines were submitted between Dec. 14, 2020, and Dec. 10, 2021, to the Vaccine Adverse Event Reporting System (VAERS). VAERS is the primary government-funded system for reporting adverse vaccine reactions in the U.S.

Foreign reports are reports received by U.S. manufacturers from their foreign subsidiaries. Under U.S. Food and Drug Administration (FDA) regulations, if a manufacturer is notified of a foreign case report that describes an event that is both serious and does not appear on the product’s labeling, the manufacturer is required to submit the report to VAERS. 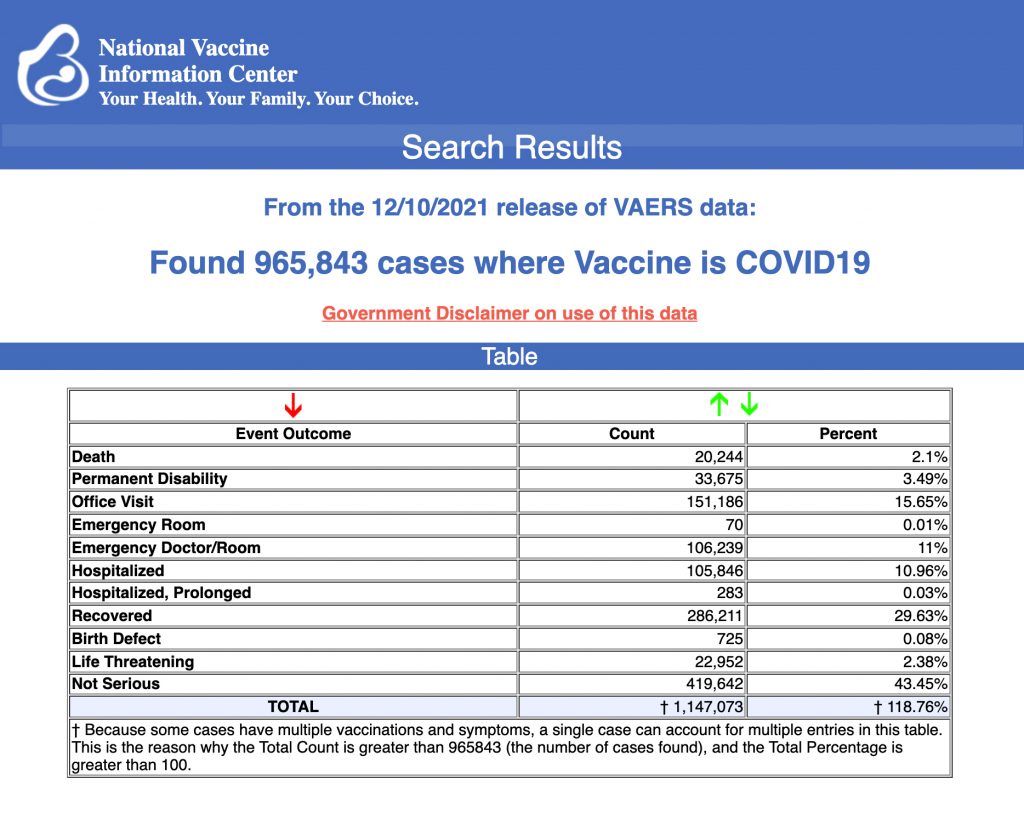 The second death (VAERS I.D. 1890705) occurred in a 5-year-old girl who died four days after her first Pfizer shot.

The most recent deaths involve a 13-year-old girl from Texas (VAERS I.D. 1913198) who died 31 days after receiving her COVID vaccine. According to her VAERS report, the girl received her first dose of Pfizer on Aug. 1.

Two weeks later, she complained of vague upper back pain and was diagnosed with a rare soft tissue cancer located on her heart despite having no previous medical history. Parents requested a VAERS report be filed in case her cancer was related to the vaccine. Her cancer and heart condition rapidly and progressively worsened and she died Dec 1.

An advisory panel to the CDC on Thursday voted 15 – 0 to “preferentially recommend” mRNA COVID vaccines Pfizer and Moderna over the J&J shot for adults 18 years and older.

The recommendation came after the agency’s advisory panel said the rate of rare blood-clotting disorders following the J&J vaccine was higher than expected. The CDC signed off on the panel’s updated guidance late Thursday.

The panel effectively discouraged vaccine providers and adults from using J&J’s shot but stopped short of recommending the vaccine be pulled from the market. The interim recommendation applies to J&J’s primary series vaccine dose and the booster dose.

The CDC’s COVID-19 Vaccine Task Force excluded “reports where [the] only thrombosis is ischemic stroke or myocardial infarction,” which significantly reduced the number of cases involving blood-clotting disorders.

COVID vaccines are “irreversible and potentially permanently damaging,” said Dr. Robert Malone, in a statement explaining why 16,000 physicians and medical scientists around the world signed a declaration publicly declaring healthy children should not be vaccinated against COVID.

Malone said the viral gene injected into children’s cells forces the body to make toxic spike proteins that could cause irreparable damage to critical organs. The novel technology used by the vaccines has not been adequately tested, Malone said.

Malone said there is no benefit for children to be vaccinated against the small risks of a virus, given the COVID injuries parents, or their children, may have to live with for the rest of their lives.

Makary told members of the House Select Committee on the Coronavirus Crisis some COVID policies have become “too extreme, too rigid and are no longer driven by clinical data.”

Makary criticized the CDC’s rush to push boosters for 16- and 17-year-olds based on lab experiments suggesting boosters raise antibody levels against Omicron.

He reminded committee members that, despite a combined annual budget of about $58 billion, neither the CDC nor the National Institutes of Health have produced a credible study on natural immunity to COVID.

As The Defender reported on Dec. 14, three studies released within days of each other showed the PfizerBioNTech COVID vaccine is less effective against the Omicron variant.

According to a preprint study by researchers at the UK’s University of Oxford in England, there’s “a substantial fall in neutralization” of antibodies in the fully vaccinated “with evidence of some recipients failing to neutralize at all.”

According to the study, breakthrough infections in those previously infected or double-vaccinated individuals could increase, although there is currently no evidence of increased potential to cause severe disease, hospitalization or death.