Warm up the Wagnerian orchestra and call in the goose-stepping chorus girls, because … yes, that’s right, it’s Springtime for GloboCap! “The Winter of Severe Illness and Death” is over! The big Black Sun is shining again! God’s in his heaven, all’s right with the world!

OK, sure, the vast majority of humanity are suffering from post-traumatic stress, having been terrorized, gaslighted, threatened, bullied, and otherwise systematically mindf***ed by their governments, the media, and “health authorities” on a daily basis for the past two years, and we’re all exhausted and at each other’s throats, and many of our businesses and incomes have been ruined, and inflation is spiraling out of control, and a lot of us are still being gratuitously demonized, segregated from society, banned from traveling, and forced to submit to invasive procedures and wear medically-pointless symbols of ideological conformity on our faces, so we’re not quite in the spirit of the season … but, for GloboCap, things couldn’t be going any better!

Not only is the final phase of their roll-out of the new pathologized totalitarianism (i.e., the New Normal) going more or less to plan, but those pesky, non-ball-playing Russians have been baited into a military quagmire in the Ukraine that could be dragged out for years! Think of all the destabilization, restructuring, and privatization opportunities, and not just in Russia and Eastern Europe, and not just during the next few years, but throughout the world and well into the future! With the majority of the Western masses brain-buggered into a state of almost catatonic credulity and obedience, who’s going to stop them? The sky’s the limit!

But I’m getting a little ahead of myself. It will be a while before GloboCap can blossom into its full expression. In the meantime, the global “Clear-and-Hold” op continues … and appears to have abruptly shifted into an extremely psychotic and fascist phase.

This shift was executed in Orwellian fashion, like that scene in 1984 where the Party switches official enemies right in the middle of a Hate Week speech. But, in our case, the switch was a little more complicated, because GloboCap didn’t just switch official enemies — like they did in the Summer of 2016 and then again in the Spring of 2020 — they revised the identity of the official enemy, not just its name, but its fundamental character, or, more accurately, and more psychotically, they split the identity of the official enemy, stripping off and embracing its fascism while simultaneously maintaining and magnifying its fascism, simulating a moral spectrum of fascism, and thus subjecting the New Normal masses to a mind-bending level of Orwellian double-think.

In the blink of an eye, without missing a beat, both the white-supremacist Putin-Nazis that plagued Democracy throughout the Trumpian Reich and the Covid-denying Anti-Vax Nazis that plagued the New Normals throughout the Global Pandemic were seamlessly replaced by the GloboCap Nazis … but, the thing is, the GloboCap Nazis are the good guys, and the Putin-Nazis and Anti-Vax Nazis are … well, I guess they’re still technically Nazis, except for the fact that they aren’t actual Nazis and are mostly just regular working-class people, whereas the GloboCap Nazis are actual Nazis (i.e., Sieg-heiling, Jew-hating, Hitler-worshiping Nazis), who the US military and Intelligence community, NATO, and assorted private “military advisors” have been funding, arming, and otherwise supporting since the 2014 Ukrainian “revolution” (i.e., coup) that they orchestrated to destabilize Russia as part of that global Clear-and-Hold operation (which operation, of course, doesn’t actually exist, and is just another conspiracy theory disseminated by Putin-Nazi traitors like me to erode support for the GloboCap Nazis, who are really just wholesome young Aryan boys who are trying to defend Democracy from Evil, and cleanse their country of the Jews and the Roma, and exterminate the Russian race, starting with the children, apparently).

OK, I know this is getting confusing, what with all the various Nazis, and so on, but that’s only because you’re still trying to make sense of the psychotic official propaganda that GloboCap is relentlessly bombarding us with. For example, this recent BBC segment in which Ros Atkins explains how the neo-Nazi Azov Detachment is actually “mainstream.” Or this NBC piece by Allan Ripp, explaining how, yes, there is definitely a serious neo-Nazi problem in the Ukraine, but if the Ukrainian Nazis (i.e., the GloboCap Nazis) persecute and murder the Ukrainian Jews, it’s Putin’s fault for invading the country and creating “chaos and insurgency,” or whatever.

Or this Unherd piece by Aris Roussinous, explaining that arming and supporting neo-Nazis “may be one of the hard choices forced by war,” and advising Zelenskyy to disarm them once the war is over and “freedom” is restored … which, obviously, he intends to do. After all, the man is Jewish! He will probably ban the neo-Nazis outright, like he banned all the non-neo-Nazi parties.

Or, if you prefer your propaganda less nuanced, you can go with CNN and get it straight from the source, for example, from Major Denis Prokopenko of the neo-Nazi Azov Regiment … 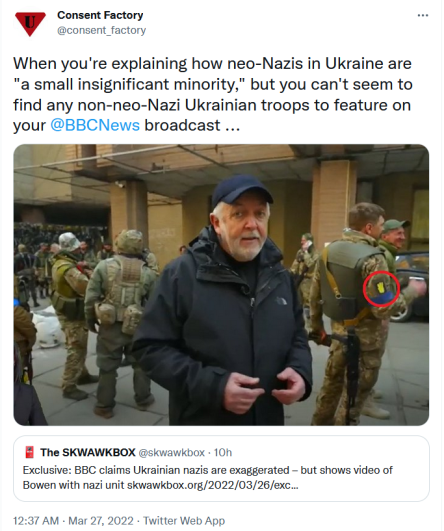 Apparently, CNN and the BBC were unable to locate any non-neo-Nazis to bring us the “fact-checked Truth” from the battlefield.

Or … wait. Sorry, I got all confused again. These are the good Nazis … the GloboCap Nazis! The actual Nazis, not the fictional Nazis. Or … wait, no … never mind. I mean, it’s not like it really matters anyway, right? The point is, it’s Spring, and the goat-footed balloon-Man whistles … no, strike the balloon-Man. This is not the time for balloon-Man references. It’s New Normal Spring! The birds are buzzing! The bees are chirping! The ICBMs are tumescent with rocket fuel and throbbing in their silos! The New Normal masses are out prancing around with their “vaccination passports” and medical-looking masks, in their official neo-Nazi Azov hoodies, waving their Ukrainian flags, and otherwise desperately trying to pretend that they haven’t just been colossally mindf***ed by GloboCap for the last two years! 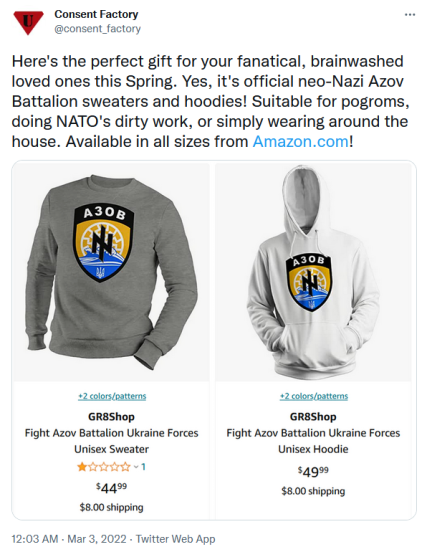 But there I go, getting negative again. I really need to try to focus on the positive, no matter how psychotic things are in reality. Here in New Normal Germany, it’s almost “Freedom Day” again! Technically, “Freedom Day” was March 18, but they rewrote the “Infection Protection Act” (again) to postpone “Freedom Day” until April 2, after which “the Unvaccinated” will be allowed back out into society and everyone will only be forced to wear symbols of conformity to official ideology on their faces on public transport, and trains, and planes, and in hospitals, and various other places, unless federal states declare themselves “hotspots” — which several states have already done — in which case “Freedom Day” is postponed indefinitely.

But whatever … it’s Springtime for GloboCap! Freedom is slavery! Ignorance is strength! The GloboCap Nazis are winning the war! Sure, Pfizer just released nine pages of “adverse events of special interest” connected to their Covid “vaccine,” but they “may not have any causal relationship” to each other! And all those videos of the GloboCap Nazis duct-taping men, women, and children to lampposts, painting their faces with chemicals, stripping them half naked, and whipping and beating them? Those people are “saboteurs” or “looters,” or “Putin-Nazi collaborators,” and it’s all just Russian disinformation! And whatever. Trust the “Science” … or something!

All right, I think that’s quite enough from me. I’ll sign off and let you get back to the show. Look, here come the triple-vaxxed, double-boosted, goose-stepping GloboCap chorus girls!

DISCLAIMER: The preceding essay is entirely the work of our in-house satirist and self-appointed political pundit, CJ Hopkins, and does not necessarily reflect the views and opinions of the Consent Factory, Inc., or its staff, or any of its agents, subsidiaries, or assigns. If, for whatever inexplicable reason, you appreciate Mr. Hopkins’ work and would like to support it, please go to his Substack page, or his Patreon page, or send a contribution to his PayPal account, so that maybe he’ll stop coming around our offices trying to hit our staff up for money. Alternatively, you could purchase his satirical dystopian sci-fi novel, Zone 23, or Volume I and II of his Consent Factory Essays, or any of his subversive stage plays, which won some awards in Great Britain and Australia. If you do not appreciate Mr. Hopkins’ work and would like to write him an abusive email, feel free to contact him directly.