VAERS data released Friday by the Centers for Disease Control and Prevention included a total of 1,226,314 reports of adverse events from all age groups following COVID vaccines, including 26,976 deaths and 219,865 serious injuries between Dec. 14, 2020, and April 8, 2022.

The Centers for Disease Control and Prevention (CDC) today released new data showing a total of 1,226,314 reports of adverse events following COVID vaccines were submitted between Dec. 14, 2020, and April 8, 2022, to the Vaccine Adverse Event Reporting System (VAERS). VAERS is the primary government-funded system for reporting adverse vaccine reactions in the U.S.

The data included a total of 26,976 reports of deaths — an increase of 277 over the previous week — and 219,865 serious injuries, including deaths, during the same time period — up 2,564 compared with the previous week. 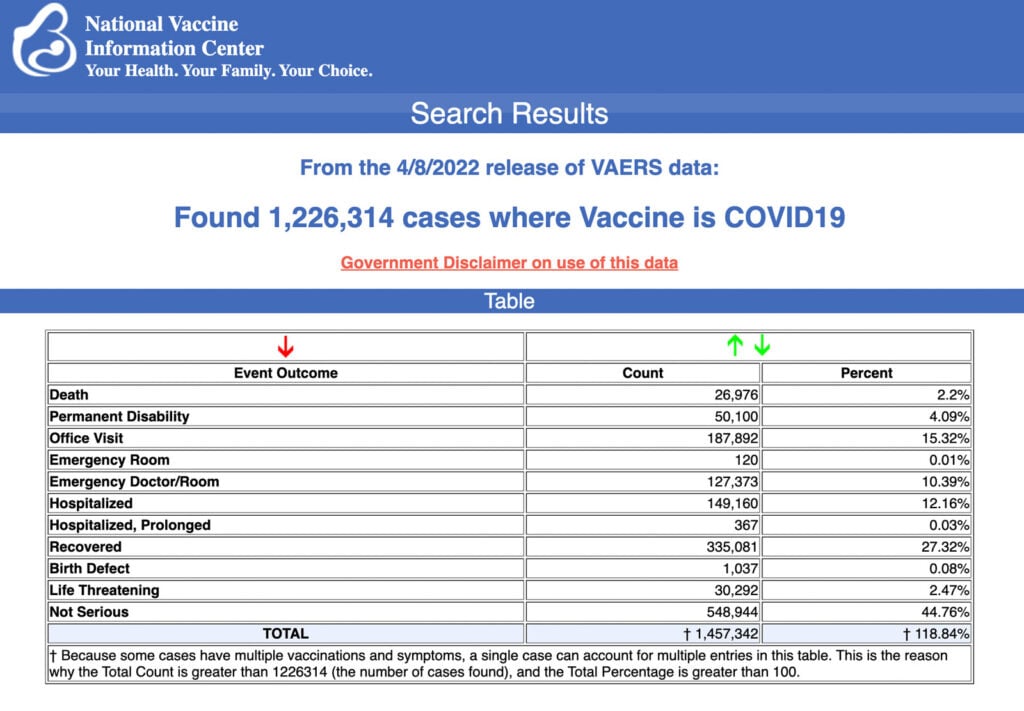 In an exclusive interview with The Defender, Carol’s son, Jeffrey Beauchine, said it was excruciating to watch his 70-year-old mother — who was healthy until she got the vaccine — die from a disease he believes the vaccine caused.

Beauchine said Carol received her first dose of Moderna on Feb. 16, 2021, and didn’t report any complaints. After getting the second dose on March 17, Carol immediately said she “felt different.” She developed numbness that spread throughout the entire left side of her body, blindness and hearing loss. She lost the ability to walk and communicate, and her brain degenerated until she passed away on Aug. 2, 2021 — just five months after receiving her second dose of Moderna.

In an exclusive interview with The Defender, Jeffrey Beauchine said his mother, Carol, knew her Creutzfeldt-Jakob Disease was related to the Moderna shot. Watching her death was like “something you see out of a movie,” he said.https://t.co/z972KqtM9w

The family submitted a report to VAERS, but the CDC has not followed up on Carol’s death. The Defender has received numerous reports of people who died from sporadic CJD after receiving a COVID vaccine — all women who were between the ages of 60 and 70, including Cheryl Cohen and Jennifer Deason Sprague.

The Biden administration on Wednesday extended the COVID public health emergency, now two years old, for an additional 90 days — allowing vaccines and other drugs to remain under Emergency Use Authorization (EUA). Keeping COVID vaccines and other countermeasures under EUA shields pharmaceutical companies from liability for the harms caused by their products.

According to Reuters, a public health emergency was initially announced in January 2020, when the COVID pandemic began. It has been renewed each quarter since and was due to expire on April 16.

The Department of Health and Human Services (HHS) said in a statement it was extending the public health emergency and will give states 60 days’ notice prior to termination or expiration. This may be the last time HHS Secretary Xavier Becerra extends it, according to policy experts.

Pfizer and BioNTech Thursday said they plan to apply for EUA of a COVID booster dose for healthy 5- to 11-year-olds based on the results of a small study that has not been published or analyzed by independent experts.

Pfizer said in a press release the third dose of its vaccine produced significant protection against the Omicron variant in children 5 to 11 in a small Phase 2/3 clinical trial. The study was based on data from only 140 children 5 through 11 years old who received a booster dose six months after the second dose of Pfizer-BioNTech’s COVID vaccine as part of the primary series.

Pfizer claimed a closer look at 30 children showed a 36-fold increase in virus-fighting antibodies — levels high enough to fight the Omicron variant, and that a third dose was “well tolerated with no new safety signals observed.”

Although Pfizer said more than 10,000 children under the age of 12 have participated in clinical trials investigating Pfizer’s COVID vaccine, only 140 were selected for the study forming the basis for the company’s EUA request.

The CDC announced Monday it was launching a month-long comprehensive agency-wide review following widespread criticism of the agency’s response to the COVID pandemic.

The agency plans to evaluate its structure, systems and processes, CDC Director Dr. Rochelle Walensky told staff in an email obtained by The Washington Post. Walensky said the goal of the review is to “modernize” the agency and “to position CDC, and the public health community, for greatest success in the future.”

The review will be conducted by Jim Mcrae, associate administrator for primary healthcare at the Health Resources and Services Administration (HRSA). The HRSA and the CDC are part of the Department of Health and Human Services.

Last month, the CDC’s decision to remove from its data tracker website tens of thousands of deaths linked to COVID — including nearly a quarter of the deaths the agency said had occurred among children — eroded public trust in the CDC’s handling of case counts.

Image by LuAnn Hunt from Pixabay.