Data released today by the Centers for Disease Control and Prevention (CDC) on the number of injuries and deaths reported to the Vaccine Adverse Event Reporting System (VAERS) following COVID vaccines confirmed that numbers are still rising, but no new trends emerged.

VAERS is the primary mechanism for reporting adverse vaccine reactions in the U.S. Reports submitted to VAERS require further investigation before a causal relationship can be confirmed.

Every Friday, VAERS makes public all vaccine injury reports received to the system for the previous week. Today’s data show that between Dec. 14, 2020 and April 1, a total of 56,869 total adverse events were reported to VAERS, including 2,342 deaths — an increase of 93 over the previous week — and 7,971 serious injuries, up 245 over the same time period. 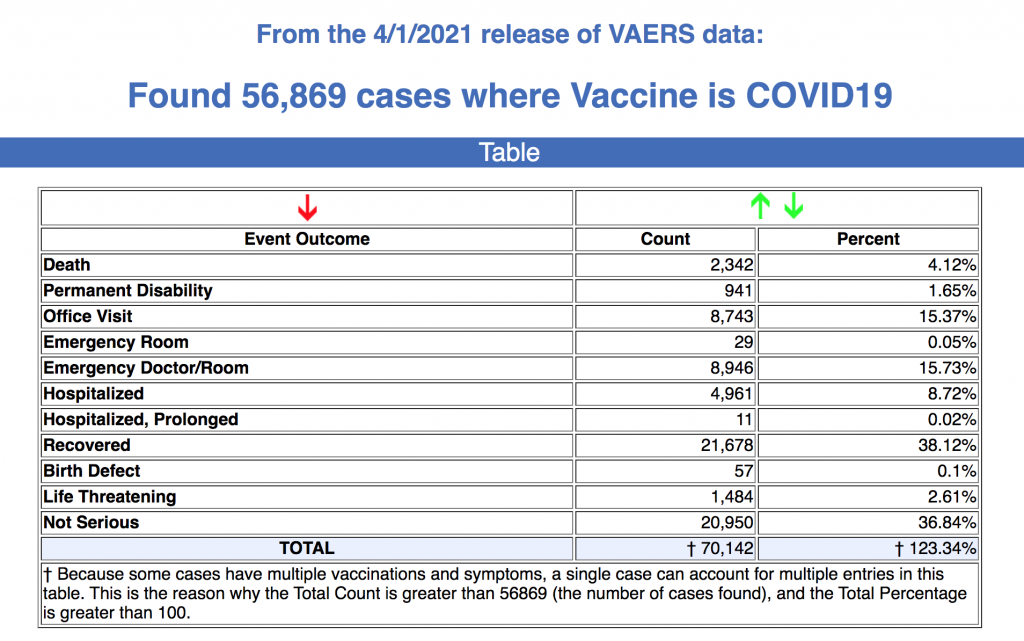 According to the CDC’s website, “the CDC follows up on any report of death to request additional information and learn more about what occurred and to determine whether the death was a result of the vaccine or unrelated.”

On March 8, The Defender contacted the CDC with questions about reported deaths and injuries related to COVID vaccines. We provided a written list of questions about how the CDC conducts investigations into reported deaths, the status of investigations on deaths reported in the media, if autopsies are being done and the standard for determining whether an injury is causally connected to a vaccine.

We also inquired about whether healthcare providers are reporting all injuries and deaths that might be connected to the COVID vaccine, and what education initiatives are in place to encourage and facilitate proper and accurate reporting.

Twenty-two days later a representative from the CDC’s Vaccine Task Force responded by saying the agency had never received our questions — even though the employees we talked to several times said their press officers were working through the questions we sent. We provided the questions again and requested a response by April 7. To date, the CDC has not responded despite our repeated follow-up attempts.

Update on investigation into death of Florida doctor after Pfizer vaccine

As The Defender reported today, Florida health officials said Thursday their joint investigation with the CDC into the death of 56-year-old Dr. Gregory Michael confirmed Michael’s death was caused by immune thrombocytopenia, a blood disorder caused by an immune reaction.

Michael developed symptoms of the disorder three days after receiving his first dose of the Pfizer COVID vaccine, and died 12 days after that.

An official with the Florida Department of Health said investigators could not determine with “medical certainty” if there was a link between the vaccine and Michael’s death, leading them to conclude the doctor died of natural causes.

On April 6, The Defender reported that a Texas teenager was hospitalized and diagnosed with Guillain-Barré syndrome a few weeks after his first dose of the COVID-19 vaccine. News reports didn’t disclose which COVID vaccine the teen received.
According to the National Institute of Health, one case of GBS was reported in February in an 82-year-old woman who had one dose of Pfizer’s COVID vaccine, though current VAERS data show 72 cases of GBS have been reported between Dec.14, 2020 and April 1, 2021.

On April 8, The Defender reported that a mass vaccination site in Colorado was shut down and 600 people with appointments turned away after 11 people experienced reactions. Two people were transferred to the hospital after medical staff determined they required additional observation.

Officials did not specify what reactions were observed or their severity, but said side effects were “consistent with what’s expected.”

As The Defender reported April 9, health officials on Thursday paused COVID vaccinations at a Wake County, North Carolina, site after 18 people experienced adverse reactions, including four people who were transferred to the hospital after being vaccinated with J&J’s vaccine.

The CDC said it is aware of adverse reactions in some people who received J&J’s COVID vaccine in Iowa, Colorado, Georgia and North Carolina, but found no reason for concern.

On April 6, The Defender reported that 246 Michigan residents fully vaccinated against COVID were later diagnosed with the virus, resulting in three deaths.

All “breakthrough cases” occurred between Jan. 1 and March 31 in people who tested positive 14 or more days after the last dose in the vaccine series. Of the 117 with hospitalization data entered, 11 were hospitalized, 103 were not hospitalized and three were reported as unknown.

The three people who died were all 65 or older and two “were within three weeks of completion of vaccination.”

On April 8, Kaiser Health News reported that a man died at age 36 of coronavirus, just days after getting his first dose of COVID vaccine. Espinoza fell ill a few days after his first dose on Jan. 5, but went to work thinking it was vaccine-related. His symptoms progressed to a fever and chills and he tested positive for COVIDfive days later. Three weeks later Espinoza had passed away.

“Even after you’re fully vaccinated, there still is a remaining risk,” said Horton, co-author of a letter to the New England Journal of Medicine about post-vaccination infection rates among healthcare workers in California. “Even if it’s so much lower, it’s still present.”

On April 6, a senior official from the European Medicines Agency (EMA) said there was a “clear” link between the Oxford-AstraZeneca COVID vaccine and a rare blood clotting syndrome, The Defender Reported.

Marco Cavaleri, the EMA’s head of vaccines, told Italy’s Il Messaggero newspaper that in his opinion, “it is clear there is a link with the vaccine, but we still do not know what causes this reaction.” But hours later the EMA denied having already established a causal connection between the vaccine and blood clots.

In a statement to Agence France-Presse, the EMA said it had “not yet reached a conclusion and the review is currently ongoing,” adding it expected to announce its findings on Wednesday or Thursday.

As The Defender reported on April 7, European regulators confirmed a “possible link” between AstraZeneca’s COVID vaccine and “very rare” blood clots, but concluded the benefits of the vaccine still outweigh the risks.

The EMA did not recommend restricting use of the vaccine based on age, gender or other risk factors, but did say cases of blood clotting after vaccination “should be” listed as a possible side effect.

The UK’s vaccine regulator, the Medicines and Healthcare products Regulatory Agency said the evidence of a link between AstraZeneca’s vaccine and blood clots was strong, but more research was needed.

Britain’s Joint Committee on Vaccination and Immunization, which advises UK health departments on immunization, said “where possible” the vaccine should not be given to adults under 30.

The EMA said Wednesday during a press conference it is also looking carefully at the J&J vaccine, as three cases of blood clots associated with low platelets, similar to the cases reported after AstraZeneca vaccines, have been reported, as well as one instance of thrombosis in a clinical trial.

On April 8, Bloomberg reported the Australian government was guiding against giving AstraZeneca COVID vaccine to people under the age of 50 after the EMA found a possible link between the vaccine and rare blood clotting issues. Chief Medical Officer Paul Kelly said the government now preferred the Pfizer vaccine for the under 50s.