This week’s number of reported deaths among all age groups following COVID vaccines passed the 5,000 mark, up 759 from last week, according to data released today by the Centers for Disease Control and Prevention (CDC). The data comes directly from reports submitted to the Vaccine Adverse Event Reporting System (VAERS).

VAERS is the primary government-funded system for reporting adverse vaccine reactions in the U.S. Reports submitted to VAERS require further investigation before a causal relationship can be confirmed.

Every Friday, VAERS makes public all vaccine injury reports received as of a specified date, usually about a week prior to the release date. Today’s data show that between Dec. 14, 2020 and May 28, a total of 294,801 total adverse events were reported to VAERS, including 5,165 deaths — an increase of 759 over the previous week. There were 25,359 serious injuries reported, up 3,822 compared with last week.

Among 12- to 17-year-olds, there were 40 reports of heart inflammation and 16 cases of blood clotting disorders. 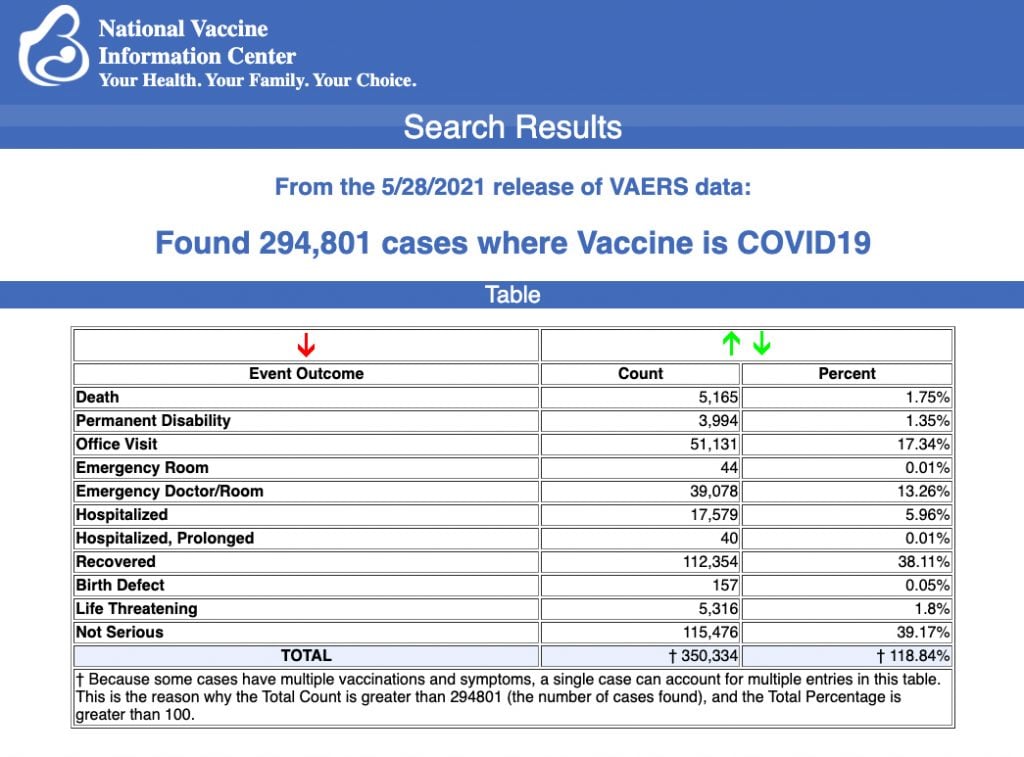 On June 4, The Defender reported seven boys between the ages of 14 and 19 in the U.S. reportedly developed chest pain and heart inflammation within four days of receiving a second dose of the Pfizer vaccine, according to a study published today in Pediatrics.

Heart imaging tests detected a rare type of heart muscle inflammation called myocarditis and pericarditis. None of the teens were critically ill but all were hospitalized.

Only one of the seven boys in the Pediatrics report displayed evidence of a possible previous COVID infection, and doctors determined none of them had a rare inflammatory condition linked with COVID or pre-existing conditions. It is possible myocarditis or pericarditis may be an additional rare adverse event related to systemic reactogenicity, but currently no causal association has been established between this vaccine and myopericarditis, the authors concluded.

A search in VAERS revealed 628 cases of myocarditis and pericarditis, among all age groups reported in the U.S following COVID vaccination between Dec.14, 2020 and May 28. Of the 628 cases reported, 392 cases were attributed to Pfizer, 206 cases to Moderna and 27 cases to J&J’s COVID vaccine.

Of the 628 total cases of heart inflammation, 40 cases occurred in children ages 12 to 17, all attributed to Pfizer’s COVID vaccine.

As The Defender reported June 2, Israeli health officials found a probable link between Pfizer’s COVID vaccine — which the country has relied on almost exclusively in its vaccination drive — and dozens of cases of heart inflammation in young men following the second dose.

A study by Israeli health officials identified 275 cases of myocarditis in Israel between December 2020 and May 2021, including 148 cases that occurred within a month after vaccination. Of those 148 cases, 27 occurred after the first dose and 121 after the second dose. About half of the cases involved people with previous medical conditions.

Many of the cases were reported among men 16 to 30 years old, and most often in 16- to 19-year-olds. Most of the patients were discharged from the hospital in less than four days, and 95% of the cases were considered mild.

On June 3, The Defender reported on research obtained by a group of scientists showing the COVID vaccine spike protein can travel from the injection site and accumulate in organs and tissues including the spleen, bone marrow, liver, adrenal glands and in “quite high concentrations” in the ovaries.

COVID vaccine researchers had previously assumed mRNA COVID vaccines would behave like traditional vaccines. The vaccine’s spike protein — responsible for infection and its most severe symptoms — would remain mostly in the injection site at the shoulder muscle or local lymph nodes.

The new research for the first time provided scientists the opportunity to see  where messenger RNA [mRNA] vaccines go after vaccination.”

As The Defender reported June 2, a 38-year-old woman who suffered multiple organ failure from J&J’s COVID vaccine said victims should be compensated by the government for taking the risk.

Kendra Lippy was diagnosed with severe blood clots resulting in 33 days of hospitalization. She suffered organ failure, and was left without most of her small intestine — and with crippling medical bills.

Lippy’s case was one of the six that led federal agencies to temporarily pause the J&J shot in mid-April.

Because the government shielded vaccine makers from liability, Lippy can’t sue J&J. She also doesn’t have a legitimate legal route to sue the government. The only current option for people who have suffered COVID vaccine injuries is the Countermeasures Injury Compensation Program (CICP), which turns down most applicants. Fewer than one in 10 people receive compensation after applying.

According to data from CICP, more than 701 claim filings since 2010 have been received from individuals requesting compensation for injuries. Of the 701 claims, only 29 claims were compensated totaling $6 million. Another 452 claims were deemed ineligible. There are 210 cases pending. As of May 26, CICP had received 152 claims involving COVID vaccines, and 293 involving other treatments.

Moderna applies for full FDA approval of its COVID vaccine

On June 1, CNBC reported Moderna asked the U.S. Food and Drug Administration (FDA) for full U.S. approval of its COVID vaccine — the second drugmaker in the U.S. to seek a biologics license that will allow it to market the shots directly to consumers. The mRNA vaccine is currently only approved under an Emergency Use Authorization, which was granted by the FDA in December. The FDA approval process is likely to take months.

On May 10, the FDA amended the Emergency Use Authorization for Pfizer’s COVID vaccine to include 12- to 15-year-olds. On May 7, the vaccine maker also applied for full approval of its vaccine. Currently, only Pfizer’s vaccine is approved for emergency use in the 12 to 15 age group.

On March 8, The Defender contacted the CDC with a written list of questions about reported deaths and injuries related to COVID vaccines. After repeated attempts, by phone and email, to obtain a response to our questions, a health communications specialist from the CDC’s Vaccine Task Force contacted us on March 29 — three weeks after our initial inquiry.

On May 19, a CDC employee said our questions had been reviewed and our inquiry was pending in their system, but would not provide us with a copy of the response. We were told we would be contacted by phone or email with the response.

On June 4, the CDC employee we contacted said our request was pending in the system, but nobody had responded to our inquiries. We were advised to submit our questions again, which we have done numerous times.

It has been 88 days since we sent our first email inquiring into VAERS data and reports.