IF the Will Smith Slap Was Staged, It Wasn’t Done for the Sake of Ratings

I'm not saying I buy into the theory that Will Smith slapping Chris Rock was a staged event, but if it was, most who are floating the idea are getting the motivation all wrong.

Unless you’ve been in seclusion from all media for the last day, you’ve heard about actor Will Smith slapping actor Chris Rock at the Academy Awards ceremony Sunday night. It’s been a non-stop topic of discussion on social media as everyone has an opinion that they may or may not delete later once responses drop.

I couldn’t care less about the incident just as I don’t care about Hollywood other than as it pertains to my pursuits of stopping the advancement of Cultural Marxism. The people who make up our entertainment industry are truly evil with very few exceptions.

With that said, I thought I should chime in and debunk claims that “The Slap” was staged to be a publicity stunt for a show that has seen dwindling ratings in recent years. I won’t debunk whether or not it was staged, but rather the motivations if it was.

Chris Rock grimacing for what he knows is coming.

His hand barely grazed him. Actors, especially action actors like Will Smith, know how to pull a punch (or slap) This was staged. pic.twitter.com/rLP0TucxHU

The slap was definitely real. Slow-motion video shows that it was a solid connection between Smith’s hand and Rock’s face. But some are saying it was staged for effect. They note that Smith laughed at the joke before walking casually on stage. They also point out that Rock was already grimacing before the slap was initiated as if he was expecting it. Tim Pool noted that the lack of any law enforcement response is noteworthy as well.

cant the state prosecute someone if they have evidence of a crime regardless of the victim's desire to file a report?

The best circumstantial evidence I’ve seen supporting this was an image breaking down the moment just before contact: 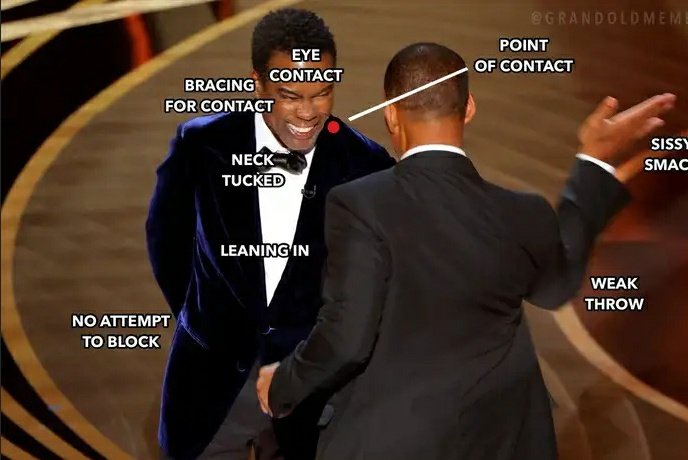 Like I said, I’m not saying it was staged. We’ll never know for sure. And perhaps most importantly, I don’t really care. There are many more important things happening in the world that need to be discussed… and THAT may be the real point in all this.

From Democrats temporarily dropping Pandemic Panic Theater in February to Anthony Fauci’s conspicuous disappearance to Ukraine to “The Slap,” there seems to be a very concerted effort to take our attention away from the rapidly emerging data showing the Covid jabs are extremely dangerous. Many of us have known this for a year or more, but more average Americans are starting to pay attention to adverse reactions.

They finally see the myocarditis data. They’re finally learning about micro-clots, VAERS, and the effects of DNA modification. Most importantly, they’re talking about it and asking questions. Pfizer and Moderna know this because they’re the ones taking many of the calls from average people and their doctors voicing their newfound concerns.

Big Pharma has influence over everything in America, including the Academy Awards…

"Pfizer and BioNtech are proud sponsors of the Oscars," is a thing I just saw on my TV lmfao pic.twitter.com/K2opYNmBTy

To those saying it was all about the ratings, nobody in Hollywood would think to boost their show’s rating DURING a presentation. That’s ludicrous. Any publicity stunts happen before the event to get people to watch it, not so they’ll run off to YouTube to catch the replays.

I’m not saying The Slap was staged and it’s not interesting enough for me to even consider investigating. But IF it was staged, it was done as a distraction, not as a ratings booster.