Most of the speculation we receive regarding the various events in the world come from independent journalists and concerned citizens. But every now and then, a politician drops truth bombs.

In case you hadn’t heard, Russia has scheduled their invasion of Ukraine for Wednesday. To prepare for the invasion, Ukrainian President Zelensky has called on his people to fly flags and wear ribbons. If all that sounds odd, you’re paying attention. 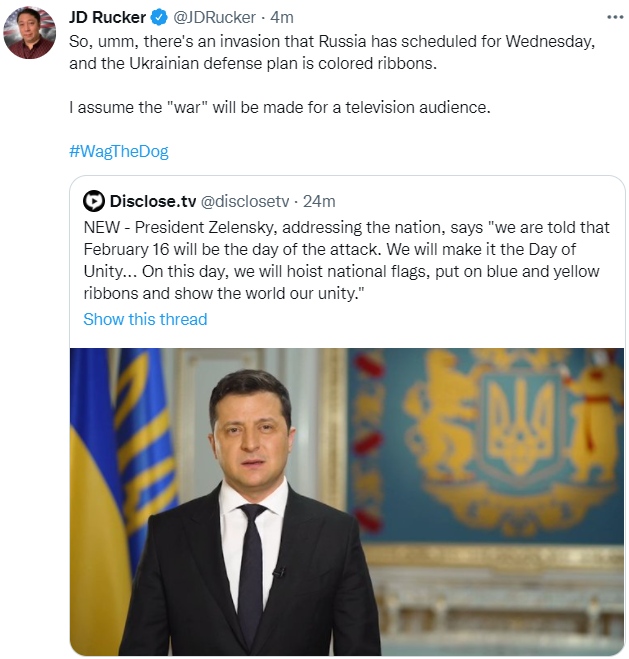 Despite the declarations of imminent doom for Ukraine by western corporate media and our “leaders,” El Salvadorian President Nayib Bukele has a different take.

“The real war is not in Ukraine, it’s in Canada, Australia, France, Brussels, England, Germany, Italy…” he Tweeted. “They just want you to look the other way.”

The powers-that-be have tried everything they can to slow the rising opposition to medical tyranny across the world. They’ve instructed corporate media to ignore the protests. They’ve stolen money donated to the various protest groups. They’ve sent in police, used tear gas, labeled protesters as terrorists, and yet the protests continue to grow.

Keep in mind, I’m not suggesting that there’s no real desire by Vladimir Putin to take Ukraine or that the conflict won’t be real. Everyone has to have an incentive to act the way they do, so the powers-that-be move world leaders around like chess pieces, sometimes without their knowledge. It’s a complex scenario, but the timing is conspicuous. With everything that’s happening in the world today, it isn’t hard for them to manipulate us and draw our attention away from what they do not want us to see.

Everything they do herds us in one direction: Towards subjugation and death. Whatever should be news but isn’t covered by the press, THAT’s where our attention should be.