VAERS data released today by the Centers for Disease Control and Prevention included a total of 946,463 reports of adverse events from all age groups following COVID vaccines, including 19,886 deaths and 150,946 serious injuries between Dec. 14, 2020, and Dec. 3, 2021.

The Centers for Disease Control and Prevention today released new data showing a total of 946,463 reports of adverse events following COVID vaccines were submitted between Dec. 14, 2020, and Dec. 3, 2021, to the Vaccine Adverse Event Reporting System (VAERS). VAERS is the primary government-funded system for reporting adverse vaccine reactions in the U.S.

Foreign reports are reports received by U.S. manufacturers from their foreign subsidiaries. Under U.S. Food and Drug Administration (FDA) regulations, if a manufacturer is notified of a foreign case report that describes an event that is both serious and does not appear on the product’s labeling, the manufacturer is required to submit the report to VAERS. 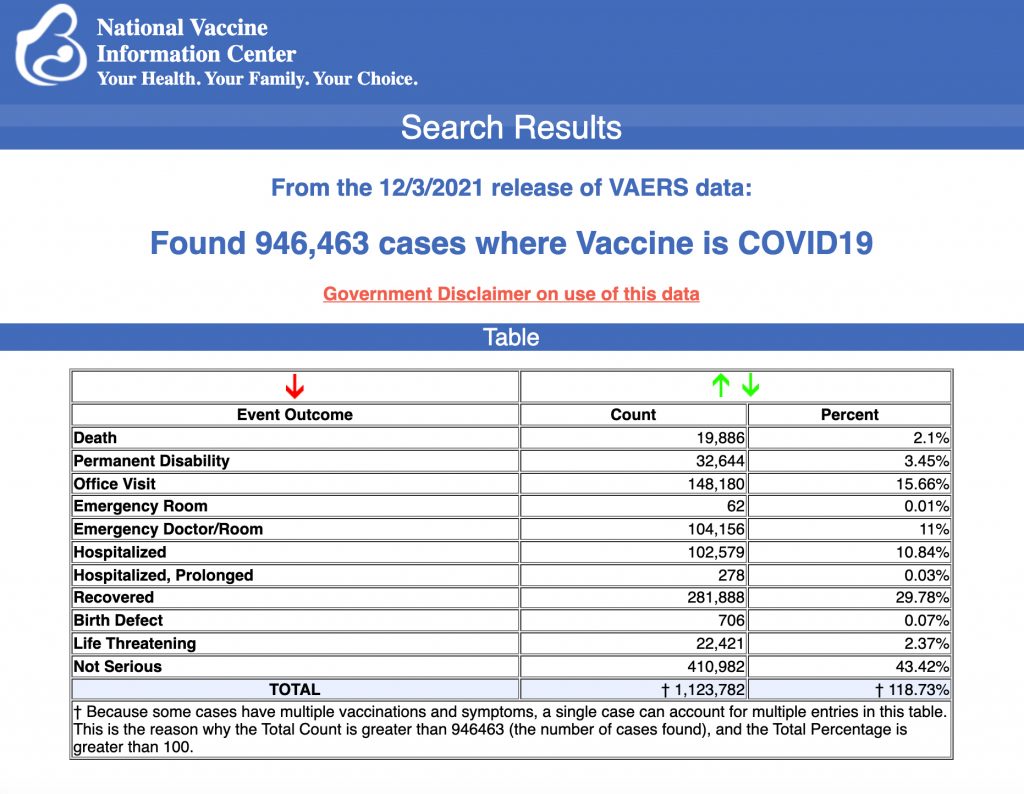 The second death (VAERS I.D. 1890705) occurred in a 5-year-old girl who died four days after receiving her first dose of Pfizer.

The most recent deaths involve a 13-year-old girl from Texas (VAERS I.D. 1913198) who died 31 days after receiving her COVID vaccine. According to her VAERS report, the girl received her first dose of Pfizer on Aug. 1. Two weeks later, she complained of vague upper back pain and was diagnosed with a rare soft tissue cancer located on her heart despite having no previous medical history. Parents requested a VAERS report be filed in case her cancer was related to the vaccine. Her cancer and heart condition rapidly and progressively worsened and she died Dec 1.

The second death involves a 17-year-old girl from Minnesota (VAERS I.D. 1912785) who experienced cardiac arrest and died at home after receiving her first dose of Pfizer’s COVID vaccine.

FDA, CDC sign off on Pfizer boosters for 16- and 17-year-olds, suggest 3rd shot for younger kids may come soon The CDC on Thursday signed off on Emergency Use Authorization of booster doses of the Pfizer-BioNTech vaccine for 16- and 17- year olds.

Walensky said in a statement initial data suggest a third shot will help strengthen protection against Omicron and other variants, and she urged older teens to get the booster.

The FDA on Thursday authorized the booster doses for 16- and 17-year-olds at least six months after receiving their second dose of the vaccine, the New York Times reported.

Pfizer boosters will be available to 16- and 17-year-olds at least six months after they received their initial two doses of Pfizer’s COVID vaccine. The Moderna and Johnson & Johnson vaccines remain authorized only for adults Meanwhile, the CDC today said it was “considering” boosters for 5- to 11-year-olds.

Roughly two-thirds of parents of elementary school-aged children are either holding off on getting their younger kids vaccinated or refuse to do so, according to ABC7 in New York.

The latest data from Missouri show 730 people died from COVID despite being fully vaccinated. According to the Missouri Department of Health and Senior Services, the state recorded 760,035 COVID cases as of Dec. 9.

More than 11,321 fully vaccinated people in Massachusetts tested positive for COVID last week — an increase of 71% over the 6,610 breakthrough infections reported the previous week.

Breakthrough cases in Massachusetts account for 40% of the state’s overall cases in recent months as the vaccine’s effectiveness wanes after six months. In all, 88,968 fully vaccinated people have tested positive for the virus since Dec. 14, according to data from the state’s Department of Public Health on Tuesday.

Definition of fully vaccinated will change to include 3rd dose

It’s only a matter of time before the definition of fully vaccinated is changed to include a third dose, Dr. Anthony Fauci, director of the National Institute of Allergy and Infectious Diseases, said Wednesday.

According to the CDC website, “fully vaccinated persons are those who are ≥14 days post completion of the primary series of an FDA-authorized COVID-19 vaccine.”

The term fully vaccinated refers to a person who has received two doses of Pfizer or Moderna COVID vaccines or a single shot of Johnson & Johnson. The definition has implications because it is used by those imposing vaccine mandates across the country, including federal mandates for healthcare workers, government contractors and private businesses with more than 100 employees.

Pfizer and BioNTech released results from their initial lab study showing a third dose was protective against the new variant, but the initial two-dose series dropped significantly in its ability to protect against the new strain.

Bourla said three doses against Omicron are equivalent to the two doses’ effectiveness against the original variant, although more data is needed from tests using the actual virus. Real-world results will be more accurate and are expected in the next two weeks, he said.

Bourla previously predicted a fourth dose would be needed 12 months after the third dose, but said with Omicron, “we may need it faster.”

120 teens hospitalized, 3 dead following Pfizer vaccine rollout for 15- to 17-year-olds in Vietnam The Vietnamese province of Thanh Hoa suspended a batch of Pfizer-BioNTech’s COVID vaccine after more than 120 teens were hospitalized after being vaccinated.

According to the province’s CDC, the teens were hospitalized for symptoms ranging from nausea and high fevers to breathing difficulties — with 17 children exhibiting severe reactions.

Since the rollout began on Nov. 30, three Vietnamese teens died after receiving Pfizer’s vaccine, including two 12-year olds and a 16-year-old. The Health Ministry said the deaths were caused by “overreaction to the vaccine,” not by a problem with the quality of the vaccine or the vaccination process.