It’s hard to believe that after two years of government policies completely failing to prevent the spread of COVID, there hasn’t been universal acceptance that attempting to control a highly infectious respiratory virus is nearly impossible.

Nearly every country that was once praised for their “response” to COVID has seen their numbers rise dramatically over time.

The mitigation commands — mask mandates, vaccine passports, mandatory vaccinations, lockdowns and lockdowns for the “unvaccinated” have all been disastrous blunders; hopeless flailing borne out of a desire to “do something” and to coerce desired behavior.

So it should come as no surprise that Hong Kong has joined the long list of jurisdictions to see their much praised policies collapse.

Equally unsurprising is that media and Twitter promoted experts have yet again ignored the ramifications of Hong Kong’s startling increases.

Media reports have consistently attempted to credit masking and other interventions with stopping COVID, but Hong Kong provides a brilliant example of premature celebration.

Back in May 2020, Vox published an article with the unequivocal headline: “How masks helped Hong Kong control the coronavirus,” with the subtitle “New research shows that universal mask-wearing may help slow the spread of Covid-19.”

The article contains so many misguided assumptions about the spread of COVID that it’s stunning to see it hasn’t been retracted, but it helpfully summarizes how often experts have seemingly been making it up as they go during the pandemic:

If any city in the world was likely to experience the worst effects of the coronavirus, Hong Kong would have been a top candidate. The urban area is densely populated and heavily reliant on packed public-transit systems, and it has very few open spaces. Moreover, a high-speed train connects Hong Kong to Wuhan, China, where the coronavirus originated.

Hong Kong, it seemed, was doomed.

But almost as soon as the outbreak first began in the city, millions of residents started wearing masks in public. One local told the Los Angeles Times that the government didn’t have to say anything before 99 percent of the population put them on.

Experts now say widespread mask usage appears to be a major reason, perhaps even the primary one, why the city hasn’t been devastated by the disease.

“If not for universal masking once we depart from our home every day, plus hand hygiene, Hong Kong would be like Italy long ago,” K.Y. Yuen, a Hong Kong microbiologist advising the government, told the Wall Street Journal last month.

“99 percent of the population put them on.”

“Experts now say widespread mask usage appears to be a major reason, perhaps even the primary one, why the city hasn’t been devastated by the disease.”

“If not universal masking once we depart from our home every day…Hong Kong would be like Italy,” said an expert government advisor.

These quotes illustrate how experts and their partners in the media have operated during COVID — present unproven claims with zero evidence, repeat them as stated fact, and use their assertions to enforce mandates based on appealing to their own (generally incompetent) authority.

We may never learn the motivations behind the great mask wearing shift in early 2020, when experts disregarded years of carefully collected pre-pandemic planning by recommending universal masking, but this article does provides a helpful explanation.

Many of them believed in propaganda.

“Not wearing masks in Hong Kong is like not wearing pants”

It’s important to highlight this quote from the Vox article, not just for the absurdity and horrifying ramifications of treating face masks as pants, but to illustrate just how dedicated the residents of the city have been to universal masking.

Almost every indoor environment has enforced masking, with what we’re told is strict societal enforcement:

As the Journal also noted, some taxi cabs and shops won’t let people inside unless they wear a mask. Someone walking around the city without a mask on invites harsh looks from passersby and even verbal reprimands. Even the public address system on Hong Kong’s metro asks riders to wear masks at all times.

So surely, SURELY if any jurisdiction on earth could achieve permanent elimination of COVID with masking, it would be Hong Kong.

Mask wearing is as ubiquitous as wearing pants, we’ve been told. Those who do not comply were shamed and barred from life as far back as May 2020, when many US states hadn’t yet mandated one of the most useless policies in world history.

Survey data has confirmed that mask usage has remained remarkably high and demonstrably consistent over time.

So has it worked? Well, not exactly. 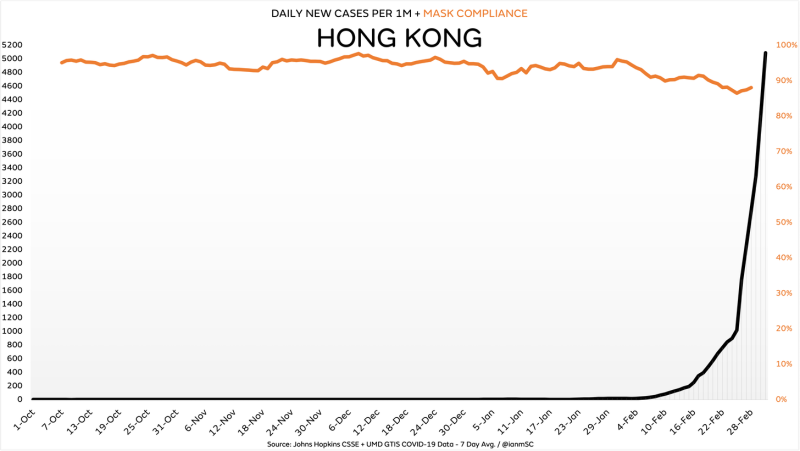 Mask compliance remained unchanged. The Science™ was wrong. The Experts™ were wrong. Even with perhaps the world’s most dedicated mask wearing populace, the numbers have exploded.

And unfortunately, it’s not just cases, deaths have risen to startling new highs: 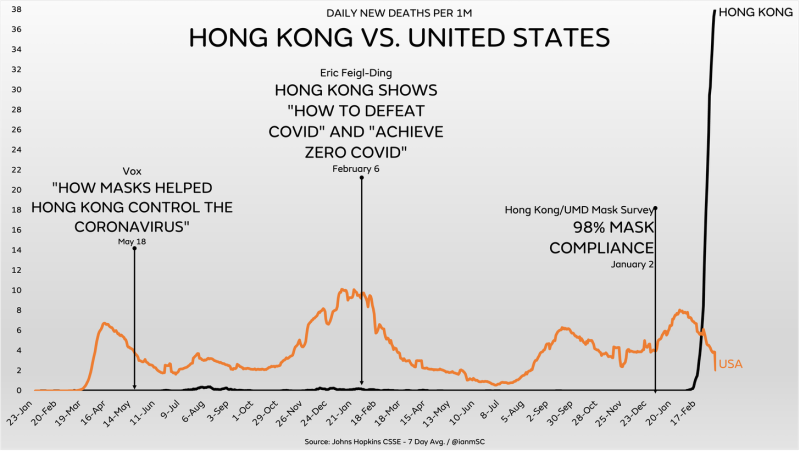 Despite Twitter promoted nutritionist Eric Feigl-Ding asserting that Hong Kong’s masking and interventions illustrated how to “defeat COVID,” newly reported deaths there are nearly 4x higher than they’ve ever been in the US.

Oh, and you may recall how the expert microbiologist advising the Hong Kong government claimed that without universal masking, Hong Kong would be like Italy… 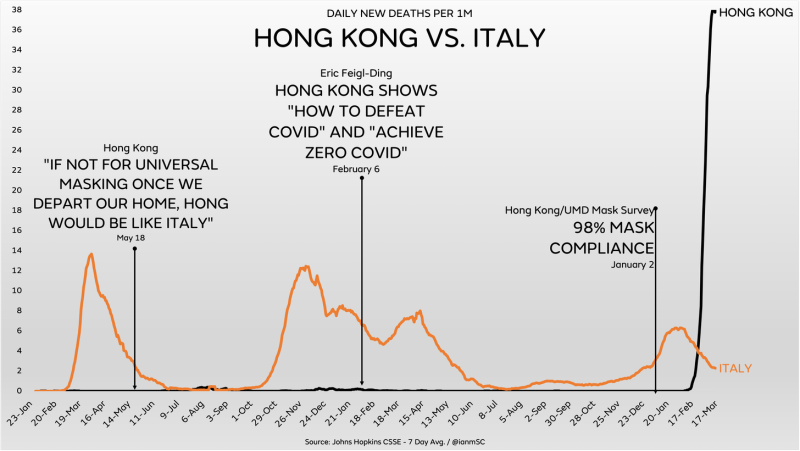 Deaths in Hong Kong are now 2.5x higher than they were in Italy’s first wave.

Surprisingly, Vox recently tried to explain how the numbers in Hong Kong and other Asian countries could have risen so rapidly — yet if you search the article for “masks,” these are the only result:

The United States is coming out of its deadliest phase of the pandemic and new Covid-19 cases are dropping sharply from their winter high. But more than 1,000 people in the US are still dying every day from the disease. Meanwhile, much of the country is relaxing requirements to wear face masks, testing is declining, and Covid-19 vaccination rates are leveling off. The US has not seen a wave of infections fueled by BA.2 just yet, but one may be looming.

How severe the next Covid-19 wave will be also hinges on how much the public is willing to take precautions, and many people are already putting masking and social distancing behind them. But as the pandemic has shown over and over, Covid-19 sets its own schedule.

While many have blamed Hong Kong’s low vaccination rate for the recent stunning increase in deaths, a look at their vaccination dashboard shows that 82% of the population 12 and up has been fully vaccinated, and 91.4% have had at least one dose:

The age specific breakdowns might provide better clues, although the fact that they report 100.32% of ages 40-49 have had at least one dose does not inspire confidence on their data collection:

The lower rates among those ages 80 and above might be one of the more significant factors, although according to the Press Secretary of the United States, “we don’t know” if COVID affects elderly individuals like President Joe Biden more severely than other age groups:

It’s certainly possible that increased vaccination rates among the extremely elderly would have helped Hong Kong, yet we’ve repeatedly been told that death rates in the US have passed other countries because not enough people have been vaccinated. A quick glance at vaccinations in the US by age group shows stunningly high uptake among elderly populations.

And the focus on vaccinations ignores the fact that during previous surges elsewhere, Hong Kong has been specifically praised for controlling COVID with mask wearing.

Why did that stop working?

Why doesn’t anyone care?

Why is Anthony Fauci calling for reinstating mask mandates even with the US’s apparently superior vaccination rates?

If you were wondering if Fauci would go away gently, he’s already back — saying it may be “necessary” to “reinstitute” forced masking which has failed literally everywhere on earthhttps://t.co/Ws0wmMnxmd https://t.co/2pkrCi1hKx

No matter where you look, mask wearing hasn’t mattered.

Hong Kong is the latest, and perhaps most severe example of this failure.

The mad rush to credit masking exemplifies the desire of media members and Twitter pundits to declare their allegiance to the correct set of ideological principles. The religious mantra of “believe in science” demands commitment to universal mask wearing, regardless of its unequivocal failure.

Hong Kong tried to control COVID with masking, and those same voices told us repeatedly that it was successful. Where were the retractions when then they subsequently reported one of the highest current death rates we’ve seen anywhere on earth?

While their cumulative rates remain lower than many European countries or the United States, COVID is not “over.” As we’ve heard repeatedly from Vox and the Twitter doctors who mindlessly maintain it’s “too soon” to lift mandates, the virus “sets its own schedule.”

Of course, they can’t mentally accept that it sets its own schedule, regardless of policy.

Ian Miller is the author of “Unmasked: The Global Failure of COVID Mask Mandates.” His work has been featured on national television broadcasts, national and international news publications and referenced in multiple best selling books covering the pandemic. He writes a Substack newsletter, also titled “Unmasked.”

Image by Base64, CC BY-SA 3.0, via Wikimedia Commons. Article cross-posted from Brownstone Institute.