As much as it pains me to ever invoke a Jim Carrey movie, things are just too odd to ignore the comparisons.

It’s been three years since I started my boycott of Hollywood, which is odd since I worked in Hollywood for nearly a decade. I cannot dedicate another dime nor waste another second supporting the people who actively attempt to destroy this country on a daily basis. But my movie memory is still strong and so today I’m pulling out an old favorite, The Truman Show, to highlight the lunacy we’re seeing around us today.

In the movie, Jim Carrey’s titular character is literally living in a bubble. A mini-world has been created to enact the ultimate voyeuristic dream of watching someone grow up on television. It’s a fascinating concept that could never happen in the real world… at least I thought it was impossible until the shenanigans we’ve witnessed for the last year-and-a-half.

Today, I’m not so sure we’re not all living in a giant bubble that’s being perpetuated by massive lies to keep us from exploring the truth. No, I don’t subscribe to the flat-earth dome theory nor do I believe any of this is being done for entertainment value (though the evil elites of this world are laughing at us from their perches). This particular metaphoric dome surrounds the entire round-earth in which voyeurism is being perpetrated for evil reasons, not broadcast to a television audience.

The similarities I’m seeing between the real world and The Truman Show stems from the universal lies being told to us, lies that are so obvious once we start questioning them that it’s mind-blowing more people aren’t recognizing them. The most blatant set of lies surrounds Covid-19 and the vaccines. What am I missing? How is it that so many otherwise lucid Americans have stuck their collective hands in the government’s sand? As our EIC often notes, one does not have to be an “anti-vaxxer” to want to ask serious questions about taking experimental drugs to fight a disease that has over a 99.9% recovery rate.

It would be different if the drugs worked, but every piece of data coming out from official sources indicates these shots are not nearly as effective as any vaccine widely distributed in human history. Over half of new Covid-19 cases in Israel are hitting the vaccinated, yet mainstream media is spinning it as if there’s no need to ask questions.

That’s where The Truman Show comes into play. Throughout the story, Truman is being fed a series of lies to prevent him from doing certain things. It’s funny that he’s a travel agent who has never left his little town. It’s even funnier that throughout the movie he’s warned against the deadly risks of air travel while mysterious toxic waste spills prevent him from driving off the island. Friends try to convince him there’s no reason to ever consider leaving. Above all else, he’s discouraged from asking questions.

Out here in California, I’m surrounded by a government, media, and citizens who act like vaccine zombies chanting “get the shot, get the shot” constantly. It’s encouraging to know there are still millions in my state who have not, but that’s only prompting the Vaccination Industrial Complex to double- and triple-down on their push to inoculate all of the pesky stragglers. We have a vaccine passport spreading faster than the disease. One cannot watch a local news report without a reminder to not only get the jab but to ignore any “extremists” who are asking questions about the drugs’ efficacy and risks.

But it isn’t just the vaccines just as it isn’t just travel in The Truman Show that’s prompting massive lies. There’s a scene when a light falls from the “sky” in Truman’s dome. Marked “Sirius (9 canis major),” the fallen “star” prompts the character to look up questioningly. The cast of characters around him all try to explain it away with the most asinine excuses possible. It’s reminiscent of the way the people and press around us did everything they could to explain away obvious voter fraud signals during the 2020 election.

We saw what we saw. As counting was halted on election night and votes materialized in certain places across the country overnight, we were told there’s nothing to see here, that it’s all legitimate and natural and sufficiently explainable. But it wasn’t. It made no sense. And as more evidence, hundreds of affidavits, video footage, and massive statistical anomalies surfaced to tell us the lights they put above us were not really stars, everyone around us perpetuated the cover stories and invented new ones along the way.

Arguably the funniest moment that echoed The Truman Show was the blatant coverup and sickening lies surrounding Hunter Biden’s laptop. It may not be as consequential as the vaccines or the stolen election, but it took such a monumental coordinated effort to downplay it for two weeks ahead of the election that the players in this sordid game had to expose themselves.

Big Tech was the first to come out as “truth be damned” information suppressors. They did everything they could to button up the NY Post report on Biden’s laptop and the insane revelations found on it. Mainstream media did their part, which wasn’t new. The Deep State came out and called it a Russian disinformation campaign. That notion was totally debunked but to this day there are still media outlets and millions of Americans retelling the Deep State’s fabrication. Every Democrat politician avoided the topic and many Republican politicians did the same.

And yet, nothing has changed. Hunter Biden has not been arrested. In fact, he’s thriving under his dad’s fraudulent regime.

There’s a scene in The Truman Show when a “whistleblower” pops out of a box to “reveal” to a young Truman that it’s all a television show. He’s dragged away in a moment that seemed disastrous for the production at first but was quickly swept under the rug. That’s our Hunter Biden moment in a nutshell. Those of us who knew the guy (and his entire family) was corrupt gave a quick cheer before coming to the realization it made no difference in the end.

The truth in the movie was only revealed to the victim of all the shenanigans when he hopped in a boat and sailed to the end of the world surrounding him. As difficult as it was for Truman, it won’t be nearly as easy for us. There is not a benevolent producer played by Ed Harris in the control box of our enclosure. Instead, we’re surrounded by forces who would rather see our demise before they’re ever willing to reveal the truth and expose the conspiracies they’ve perpetrated against this world.

In The Truman Show‘s post-modern society, truth is relative and only applicable to the needs of the moment. In the post-truth society being built around us, “truth” is absolute even if it’s false. With all the similarities I manufactured for effect in this article, the contrasts between what we’re seeing here and what we saw in The Truman Show are terrifying. It isn’t just the stakes; we’re in a life-or-death struggle instead of a fight for higher ratings and to keep the star of the show in the dark. It’s also the methods that are in stark contrast. The powers surrounding us are willing to do anything to shut us up. 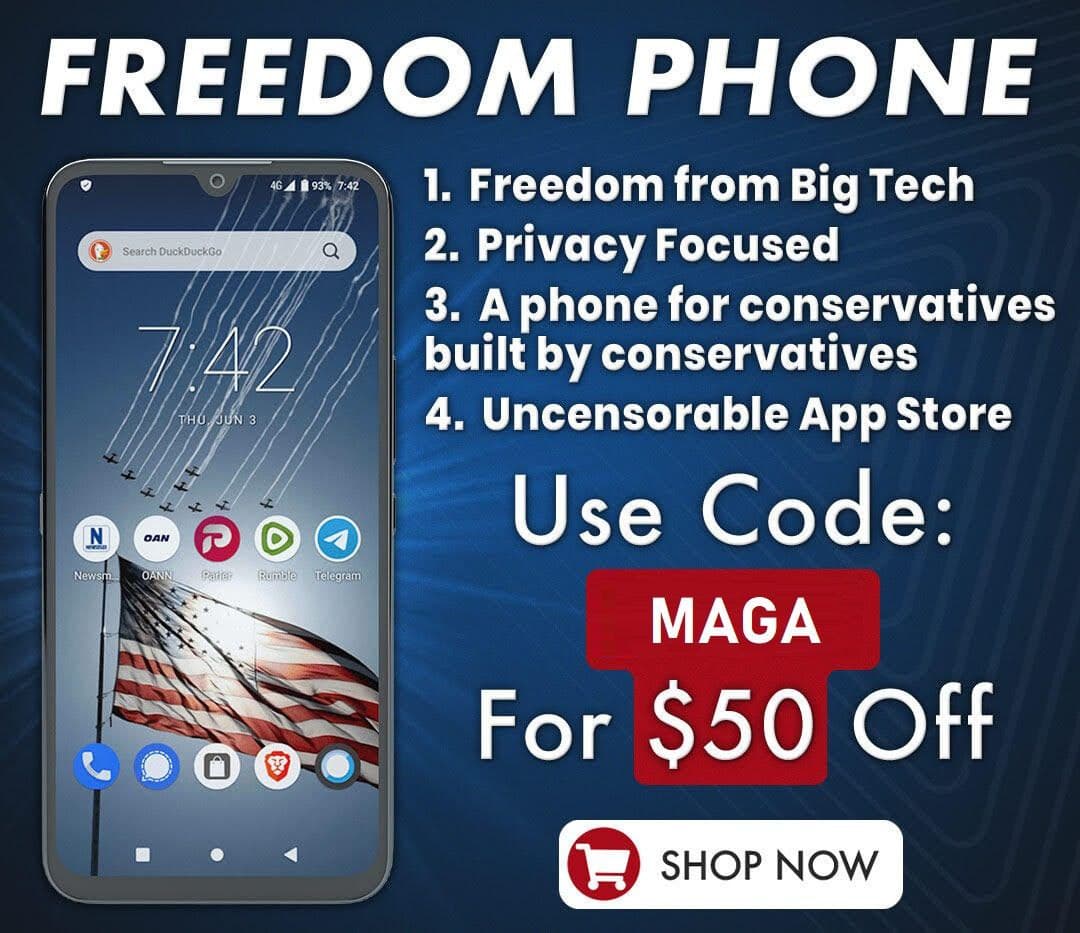 This is why this publication and the others in our network push so hard for donations. We’re trying to bring the truth to light but it isn’t easy and it’s not cheap. We need to spread the word any way we can. With Big Tech and mainstream media against us, we must find alternative means to disseminate what’s really happening in the world.

Truman only found the truth when he made the boldest move of his life. We must do the same. It’s time to tell the powers-that-be that we’re not going to sit back and let them destroy our world… and us along with it.

They say we have to go big or go home. We’re trying to go big and bring the patriotic truth the the nation, but we need help.

Readers may or may not realize that over the past year, we’ve been bringing more conservative news and opinion outlets under our wing. Don’t take our expansion as a sign of riches; all of the “acquisitions” have been through sweat and promises of greater things to come for all involved. As a result, we’ve been able to bring together several independent media sites under a unified vision of preventing America from succumbing to the progressive, “woke,” Neo-Marxist ideologies that are spreading like wildfire across America.

To overcome our revenue gap and keep these sites running, our needs fluctuate between $3000-$7000 per month. In other words, we’re in the red and hemorrhaging.

The best way you can help us grow and continue to bring the truth to the people is by donating. We appreciate everything, whether a dollar or $10,000. Anything brings us closer to a point of stability when we can hire writers, editors, and support staff to make the America First message louder. Our Giving Fuel page makes it easy to donate one-time or monthly. Alternatively, you can donate through PayPal as well.

As the world spirals towards radical progressivism, the need for truthful journalism has never been greater. But in these times, we need as many conservative media voices as possible. Please help keep NOQ Report and the other sites in the network going.