The Centers for Disease Control and Prevention (CDC) today released new data showing a total of 1,103,893 reports of adverse events following COVID vaccines were submitted between Dec. 14, 2020, and Feb. 4, 2022, to the Vaccine Adverse Event Reporting System (VAERS). VAERS is the primary government-funded system for reporting adverse vaccine reactions in the U.S. 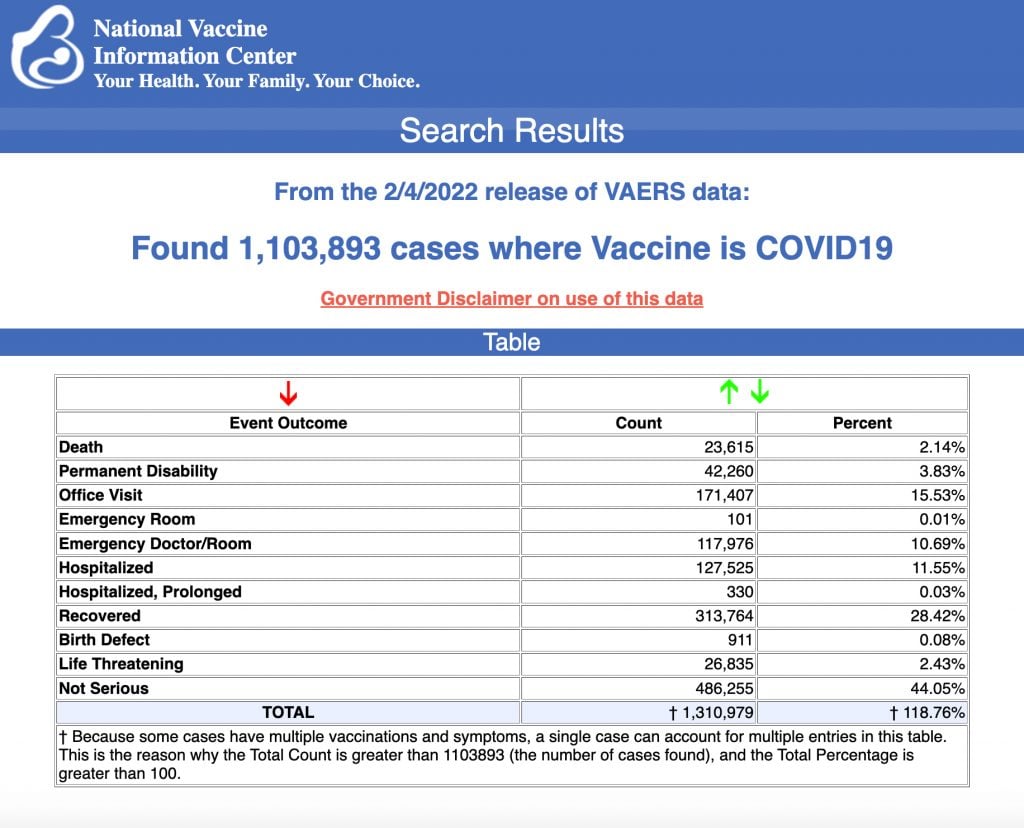 The most recent death involves a 7-year-old girl (VAERS I.D. 1975356) from Minnesota who died 11 days after receiving her first dose of Pfizer’s COVID vaccine when she was found unresponsive by her mother. An autopsy is pending.

The most recent deaths involve a 13-year-old male (VAERS I.D. 2042005) from an unidentified state who died from a sudden heart attack seven months after receiving his second dose of Moderna, and a 17-year-old female from an unidentified state (VAERS I.D. 2039111) who died after receiving her first dose of Moderna. Medical information was limited and it is unknown if an autopsy was performed in either case.

Pfizer and BioNTech announced today they are delaying their request to the FDA to authorize the Pfizer-BioNTech COVID vaccine for children under five years old, citing not enough data on the efficacy of a third dose.

The FDA said its advisory panel meeting scheduled for next week will be postponed. Pfizer was originally expected to publish an analysis of its data today.

Pfizer said it will wait for its data on a three-dose series of the vaccine — expected in April — because it believes three doses “may provide a higher level of protection in this age group.”

Pfizer said in December 2021 that two doses of its Pfizer-BioNTech vaccine failed to generate a strong immune response during its clinical trial of children ages 2 to 4.

Despite the results of its trial, the company asked the FDA this month to authorize these first two doses, with a plan to submit additional data in the coming weeks on a third dose, NBC reported.

As The Defender reported Wednesday, some experts speculate the push to expand the authorization to the younger age group would lay the groundwork for subsequently folding COVID shots into the childhood vaccine schedule — thereby ensuring “liability protection forever.”

Milo Edberg, 6, has been intubated and hospitalized since receiving his COVID vaccine on Dec. 10, Alpha News reported.

Edberg’s mother, Carrie, said her son was at M Health Fairview’s Masonic Children’s Hospital in Minneapolis, Minnesota for a minor procedure when a doctor recommended he receive the COVID vaccine.

Carrie said she followed the advice of her doctor, who told her the vaccine was “safe and harmless.”

Carrie said the evening after receiving the shot, her son was gasping for air. She dialed 911. Edberg was transported back to the hospital, was intubated and diagnosed with myocarditis.

He was “perfectly fine and then he wasn’t,” Carrie said. He was “eating on his own [but] now he can’t even swallow his saliva.”

Doctors have no answers and cannot explain her son’s affliction, Carrie said. They haven’t even been able to provide a timeline for when her son might return home or whether he will regain any quality of life — and they “won’t bring up the vaccine” when discussing Edberg’s situation.

Carrie filed a VAERS report in January and said her son received a 10-15 minute visit from an infectious disease specialist who said they would file a report with the CDC and and Pfizer early in his hospital stay. She has heard nothing since.

The CDC maintains most cases of myocarditis after COVID vaccines are “mild” and patients recover quickly.

Not all doctors agree. As Dr. Steven Pelech of the University of British Columbia explained last August:

“Contrary to what a number of people have said, there is no such thing as ‘mild myocarditis.’ It’s the destruction of the myocytes, the heart cells that contract. When those cells die, they are not replaced in your body and are instead replaced by scar-tissue, which is from fibroblasts — skin cells which don’t have contractile activity …Every time you get an inflammatory response, you lose more of that contractility and have a greater chance of heart attack and other problems later in life.”

A New Zealand writer observed that “mild” clinical manifestations in the present are meaningless for interpreting longer-term risks.

Using magnetic resonance imaging (MRI) scans with gadolinium contrast — capable of showing “damaged heart areas undetectable by any other means” — studies of children and adolescents who developed myocarditis following COVID vaccination revealed, in the vast majority, a “potentially poor prognosis despite the heart seeming to have returned to normal.”

Jeanie Evans, 68, of Effingham, Kansas, died of “anaphylaxis due to COVID-19 vaccination,” according to her autopsy report acquired by the Topeka Capital-Journal.

Evans died March 24, 2021, one day after her first dose of Moderna’s vaccine.

According to the autopsy report, Evans said her airway felt blocked about 15 to 20 minutes after she received her first dose on March 23, 2021. She was taken by ground ambulance at 5:21 p.m. to Stormont-Vail hospital, where she died at 11:55 a.m. the next day.

Evans had a medical history of hypertension, environmental allergies, allergic disorders and reactive airway disease. She previously experienced an anaphylactic reaction to the drug Albuterol, the report said.

Colt Umphenour, one of Evans’ sons, said the family plans to file a lawsuit.

Health authorities in Denmark announced Friday they are considering “winding down the entire general vaccination program later in the spring.”

According to the Associated Press, officials see no reason to administer a booster dose to children or a fourth shot to residents at risk of severe COVID.

The Danish Health Authority said in a statement the third wave of COVID was waning “due to the large population immunity,” and the country can cope with increasing infection without getting serious illness.

The agency said it would continue to follow the epidemic closely should there be a fourth spring wave or new worrying variants.

Denmark ended most of its pandemic restrictions earlier this month after officials said they no longer considered COVID “a socially critical disease.”


CDC Forced to Reveal They Had 71 MILLION Symptoms


A Revolution of Truth